A Look Back At Frank Sheeran, The Subject Of Martin Scorsese's 'The Irishman' 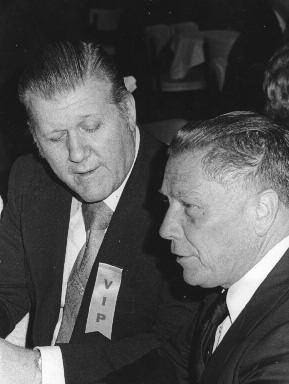 
He was a thug. And a drunk. He liked to hang around wiseguys.

He may have “done some work,” although the consensus is that he paid someone else to pull the trigger.

What he didn’t do, according to most reliable sources, is put two bullets in the back of Jimmy Hoffa’s head.

The Irishman, Martin Scorsese’s latest Mafia epic, may alter the public perception but not the reality of who Frank Sheeran was and the role he played in the underworld.

“He was a tough guy and a big drinker,” said former Philadelphia mobster Nicholas “Nicky Crow” Caramandi. “He used to come down to this restaurant on Front Street every Monday night. We’d eat spaghetti and clams.”

Caramandi, one of the first Philadelphia mobsters to turn government witness back in the 1980s, said he has no first-hand knowledge of the Hoffa hit, but said everyone in the underworld knew “it came from those guys in North Jersey…Provenzano and his people.” He doubts very much that Sheeran was the shooter.

A North Jersey mob figure says using Sheeran to lure Hoffa into the car that day back in 1975 would make sense. Sheeran was Hoffa’s friend. They had a long relationship built around trust. You always want your victim to feel comfortable. But the mob wouldn’t have gone to “an outsider” to carry out the murder, he said. And when it came to a hit of the magnitude of the Jimmy Hoffa murder Sheeran was still, in mob parlance, an outsider.

… The Irishman is based on the book “I Heard You Paint Houses” written by Sheeran’s lawyer Charles Brandt. Both the movie and the book have raised eyebrows in law enforcement and underworld circles. In addition to claiming he was the man who shot Hoffa, Sheeran, who died in 2003, told Brandt that he provided the rifles used in the assassination of John F. Kennedy and that he was the hitman who gunned down mobster Joey Gallo at Umberto’s Clam House back in 1972.

… While adopting Sheeran’s questionable account, The Irishman also offers some snapshots of the Philadelphia underworld in the 1970s. Angelo Bruno, portrayed by Harvey Keitel, has a few brief scenes. Skinny Razor DiTullio’s Friendly Lounge at Eighth and Washington and the still very popular Villa di Roma restaurant on Ninth Street also figure in the story.

This was the world in which Sheeran operated. It was where he got his start. There is no doubt he was a player. But the movie only scratches the surface when it comes to Philadelphia, the mob and the Teamsters. 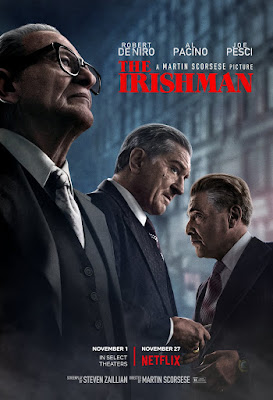 You can also read my Washington Times On Crime column on Sheeran and The Irishman via the below link:

www.pauldavisoncrime.com/2019/12/oldfellas-frank-sheeran-irishman-and-i.html
Posted by Paul Davis at 1:26 AM