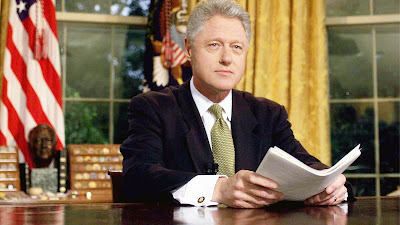 Marlow Stern at the Daily Beast offers a piece on a new documentary that features former CIA officers blaming former President Clinton for 9/11, as he didn’t allow American forces to take out bin Laden when they had the chance before 9/11.


Former President Bill Clinton has talked openly about how he could have killed Osama bin Laden—but passed.


“I nearly got him. And I could have killed him, but I would have to destroy a little town called Kandahar in Afghanistan and kill 300 innocent women and children, and then I would have been no better than him. And so I just didn't do it,” Clinton confessed to an Australian audience just 10 hours before two planes struck the World Trade Center.
AdChoices


But in The Longest War, a new documentary from director Greg Barker (Manhunt) and executive producer Alex Gansa (Homeland), former CIA agents reveal that they had another opportunity to take out Osama bin Laden with little collateral damage.


“Bin Laden was constantly moving, and we were using Afghan tribal networks to report on his travels and his whereabouts,” Bob Grenier, then-CIA station chief in Islamabad, Pakistan, says in the film.

When the Afghan tribal networks uncovered that a caravan carrying bin Laden would be traveling along a certain route, they suggested U.S. forces bury a cache of explosives along it to eliminate the infamous terrorist. But Grenier told them they’d be “risking jail” if they did, and that was all thanks to President Clinton.


“The CIA had a so-called ‘lethal finding’ [bill] that had been signed by President Clinton that said that we could engage in ‘lethal activity’ against bin Laden, but the purpose of our attack against bin Laden couldn’t be to kill him,” Grenier explains in the film. “We were being asked to remove this threat to the United States essentially with one hand tied behind our backs.”


Note: I changed the headline from CIA agents to CIA officers. Career Americans at the CIA are officers, not agents. Agents, or assets, are the foreign nationals that CIA case officers recruit to spy for America.
Posted by Paul Davis at 10:12 AM