D-Day: On This Day In History The Allied Forces In WWII Landed On The Normandy Beaches 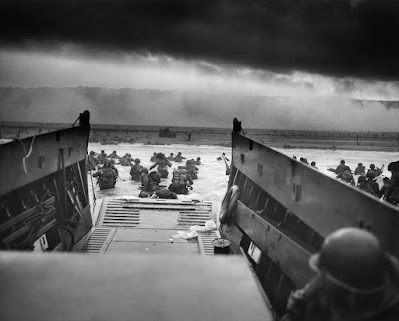 As onthisday.com notes, on this day in 1944 the Allies hit the Normandy beaches.

On June 6, 1944, Allied forces invaded Europe. The Normandy landings, the largest amphibious invasion ever undertaken, took years to plan, involved the invention of new technologies and proved that Hitler's 'Fortress Europe' was made of sand. Photographer Robert F. Sargent took the above photo - aptly named "Into the Jaws of Death" - as troops waded ashore on Omaha Beach, the most calamitous of the landing sites. On the day at Omaha, little went to plan, most landing craft missed their targets and German defenses were unexpectedly strong. Nevertheless, the Allies secured a foothold on all beaches. From there they broke out into Normandy proper as German resistance faltered. D-Day stands out as one of the most crucial moments in history: along with the German collapse on the Eastern Front, the success of the Allies in the West ensured that the Nazi defeat was near.