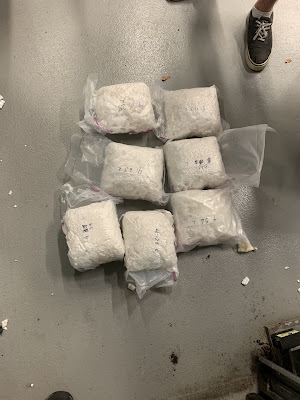 The Pennsylvania Attorney General’s Office released the below information:

HARRISBURG—Attorney General Josh Shapiro today announced that the Office of Attorney General, in collaboration with state and local law enforcement, has taken down a large drug trafficking organization in Delaware, Montgomery, and Philadelphia counties. While executing 25 search warrants related to this case, agents seized 11 firearms, including two stolen pistols.

“Gun and drug trafficking is a violent enterprise, and it’s one that makes our communities less safe. Four of the defendants were convicted felons and charged with illegally possessing firearms,” said Attorney General Shapiro. “My office, along with our state and local law enforcement partners, is working overtime to shut down gun and drug trafficking organizations and protect Pennsylvanians.”

On June 16, 2021, agents from the Pennsylvania State Police, Delaware County Drug Task Force, and Folcroft Police Department executed 25 search warrants on the homes, vehicles, and personal property of six people suspected to have been operating the drug trafficking organization. During the execution of the search warrants, agents seized 11 guns, 31 pounds of methamphetamine, 45 pounds of marijuana, 1,400 grams of cocaine, 300 grams, or 1,500 doses, of heroin/fentanyl, 50 packets of heroin/fentanyl, and 100 ecstasy pills. Agents also seized $152,820 in cash, as well as drug packaging and distribution supplies.

All defendants have been charges with Possession With Intent To Deliver, Corrupt Organizations, Dealing In Unlawful Proceeds, Criminal Use Of A Communications Facility, and related charges. All defendants except Hyland and Vega have been taken into custody, and warrants have been issued for their arrest. Hyland, Igbal, Lee, and Llamas have also been charged with Violations of the Uniform Firearms Act (VUFA)—Possession By A Prohibited Person.

This case is being prosecuted by Deputy Attorney General Karin Judge. All charges are accusations. The defendants are innocent unless and until proven guilty.