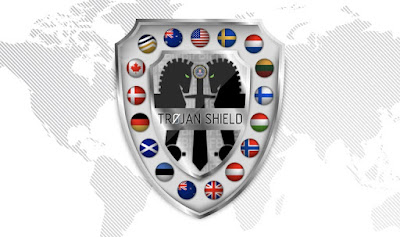 The FBI released the below information on Operation Trojan Shield:

Criminal organizations that rely on hardened, stripped-down devices to send encrypted messages may learn this week they have been using a platform operated by the very investigators they are trying to thwart.

In an innovative effort, the FBI, with the help of the Australian Federal Police, launched their own encrypted communications platform and supplied more than 12,000 devices to hundreds of criminal organizations that operate around the globe.

The FBI, along with the Drug Enforcement Administration, Australian Federal Police, Europol, and law enforcement partners in more than a dozen countries, are announcing the results of that covert effort, known as Operation Trojan Shield. In recent days and weeks, authorities have carried out hundreds of arrests in Australia and across Europe as a result of intelligence gathered during the operation. Law enforcement has also been able to mitigate direct threat-to-life situations.

The FBI’s San Diego Field Office was the hub for the more than 100 agents and analysts and 80 linguists who were pooled together for the operation that began with the takedown of the encrypted phone provider Phantom Secure. In 2018, the FBI and the U.S. Attorney’s Office for the Southern District of California pursued charges against the company’s executives for facilitating the transnational importation and distribution of narcotics by providing encrypted devices to criminals.

You can read the rest of the piece and watch videos via the below link: