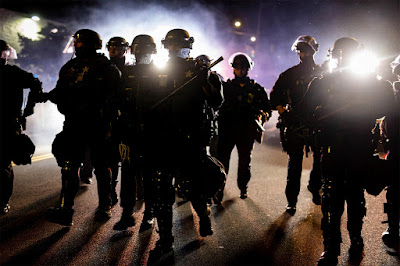 Rich Lowry at the New York Post offers his take on cops and crime:

WANTED: Trained security professionals to deal with ­elevated levels of crime and mayhem at risk to their own life and limb, while getting called racist oppressors and potentially thrown under the bus by elected ­officials.

This has become the de facto employment notice for police around the country, and, unsurprisingly, cops and potential cops don’t find it particularly enticing. Why would they?

America’s cities are feeling the effects of a year’s long experiment in what would happen if political and media elites celebrated a movement based on the idea that police are racist goons, excused rioting and explaining away spiraling crime and made it clear to cops that if they make a mistake, they will, at the very least, ­become instantly infamous.

Portland, Ore., has been a veritable research lab for this experiment. The latest blow to the city is the mass resignation of the Portland Police Bureau’s Rapid Response Team, which is responsible for policing protests in the city — a challenging, endless and literally thankless job.

Rioting has become part of the fabric of urban life in Portland, where demonstrators have been doing battle with cops nearly ­every other night since the death of George Floyd.