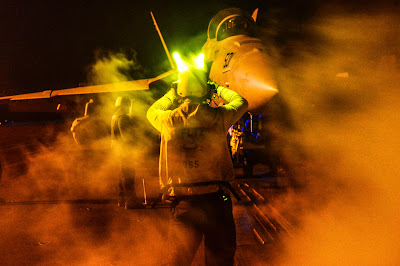 Officials reported details of the latest strikes, which took place between 8 a.m. yesterday and 8 a.m. today, local time, noting that assessments of results are based on initial reports.

-- Near Hasakah, one airstrike struck an ISIL weapons manufacturing building.

-- Near Makhmur, one airstrike struck an ISIL staging area.

The strikes were conducted as part of Operation Inherent Resolve, the operation to eliminate the ISIL terrorist group and the threat they pose to Iraq, Syria, the region, and the wider international community. The destruction of ISIL targets in Syria and Iraq further limits the terrorist group's ability to project terror and conduct operations, officials said.

Note:  The above U.S. Navy photo by Petty Officer 3rd Class Josh Petrosino shows a U.S. Navy seaman directing an E/A-18G Growler to the catapult on the flight deck of the aircraft carrier USS Theodore Roosevelt in the U.S. 5th fleet area of operations on May 28, 2015. The Theodore Roosevelt is supporting Operation Inherent Resolve, which includes strike operations in Iraq and Syria as directed.

You can click on the above photo to enlarge.
Posted by Paul Davis at 4:07 PM