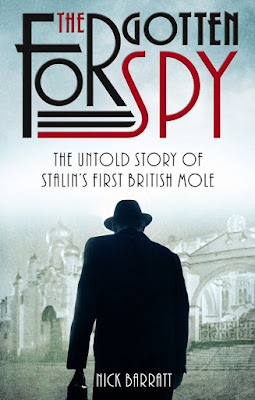 Warren Manger at the British newspaper the Mirror offers a piece on the Soviet Union's first mole in the British government, predating Kim Philby and the Cambridge spy ring.

He was blown up on the front line during the First World War and helped to draft one of the most important peace treaties in history.

He even delivered coded messages to the King.

But Ernest Oldham was no national hero – he was one of Britain’s worst traitors.

As the first British spy to work for Stalin’s Russia, he sold vital secrets and spent the cash on chauffeur-driven cars, foreign holidays and endless bottles of booze.

As a civil servant at the Foreign Office, he was trusted with encrypted messages sent to embassies and consulates around the world.

And as a member of the team working on the Treaty of Versailles at the end of the First World War, his treachery could even have helped bring about the Second World War by enabling the Russians to scupper later negotiations between Germany and the rest of Europe.

The backlash from those failed talks caused such anger in Germany that it carried Adolf Hitler to power in 1933.

Not that Oldham lived to see all the consequences.

After four years of selling secrets he was found dead in a gas-filled kitchen in the upmarket Kensington area of London in September 1933, aged 39.