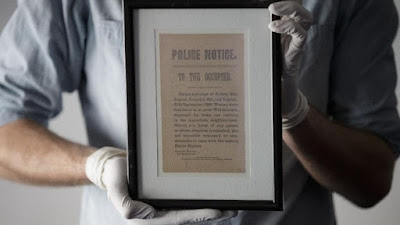 LONDON –  Guns, gallstones, death masks and hangman's ropes are going on display in an exhibition drawn from one of Britain's most macabre, and least-seen, museums.

For more than a century, the Crime Museum has sat inside London police headquarters, open only to Scotland Yard staff and invited guests.

Hundreds of the objects will leave Scotland Yard for the first time for an exhibition at the Museum of London opening in October.

The museum announced Thursday that the exhibition will comprise some 600 items, including the death masks of executed murderers, a pistol used in an attempt to kill Queen Victoria and notes from a senior detective on the 1888 Jack the Ripper murders.

One grisly exhibit features gallstones — the only remains of a victim of the 1940s "Acid Bath Murderer."

And you can learn more about the crime museum's history via the below British police piece: