Why America's Most Famous Veterans Lined Up Behind Rick Perry 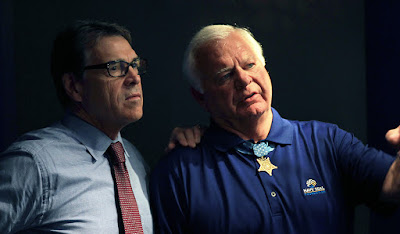 It was a hot day on a Texas ranch in 2010, and Chris Kyle — the man who would one day become the most famous veteran in America — was about to “make an ass of himself” in his first meeting with Governor Rick Perry. “There was a minute when a photo was about to be taken that he just did something hysterically funny,” says Taya Kyle, widow of the Navy SEAL now known nationwide as the “American Sniper.” She’s cagey about exactly how her husband ribbed Perry, but can’t stop herself from laughing at the memory.

“It’s one of those things where the governor could’ve rolled with it, or he could’ve been not at all thrilled,” Kyle says. Chris later told her it “could’ve gone either way — it could’ve pissed him off.” Instead, the governor just laughed at the teasing, and the two quickly became close friends. “He thought, ‘Good! I’m not looking for somebody to kiss my backside. Just be real with me,’” Kyle says Perry later explained to her. “I felt like maybe that’s where [Perry and Chris] really connected.

They were just these two guys that were going to keep it real.” It’s a sentiment repeated over and over by the high-profile former warriors backing his presidential run — with Perry, what you see is what you get. From Taya Kyle to “Lone Survivor” Marcus Luttrell to Medal of Honor winner Michael Thornton, America’s best-known veterans and their families are taking to the campaign trail to rally support for the former Texas governor in 2016. Though these famous surrogates express admiration for his conservative, small-government policies, what attracts them to Perry is his character, humility, and compassion for suffering soldiers. And in a GOP primary where foreign policy is sure to loom large, their support may prove a potent weapon.