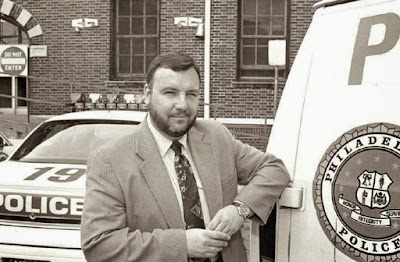 Below is my first online Crime Beat column, which originally appeared in The Orchard Press Online Mystery Magazine in August of 2002.

I've heard this statement from many police officers over the years. Most of the cops I've met tend to open the conversation by debunking the public's erroneous perception of the police, which they believe is gleaned mostly from television. From car chases to shoot outs, TV rarely gets it right, I'm often told.

Television producers and writers are quick to shoot back that reality makes lousy entertainment. Would you be interested in watching an hour long show about cops on an uneventful stakeout or follow them along as they fill out forms?

But the best crime dramas, it seems to me, do maintain a reality base.

I've long been a student of crime, dating back to my days as a South Philly street kid and aspiring writer. I went on to do security work in the Navy and later as Defense Department civilian. As a writer, I've covered the crime beat for a good number of years. I've gone out on patrol with cops, accompanied detectives as they worked crime scenes, observed criminal court proceedings, visited jails and prisons, and covered street riots, mob murders and drug operations. In this column, I'll report on the world of crime in both fact and fiction.

When I first heard about the Civilian Police Academy, I made a comment about it sounding like one of the plot lines from the sophomoric Police Academy movie series. But when my editor later called me and asked if I would like to attend the pilot session and write an 11-part series on my experiences there, I said sign me up.

The students that attended the pilot session were a mixed group. There were community leaders, lawyers, town watch volunteers, political aides, clergy members, corporate security people, average citizens with an interest in police work and crime, and one reporter - me.

One thing that I remember clearly from the course was the fact that all of the instructors took great pains to have us forget everything we ever saw about police work on television.

"Police recruits are chomping on the bit when they first come here, " our first instructor told us. "They want to be just like the cops on TV, but we bring the reins in on them."

Police recruits are taught not to emulate the behavior of TV cops. TV cops touch evidence at crime scenes and taste substances to determine if it is an illegal drug. The instructor then went on a long tirade about all of the technical and procedural gaffes he's seen on TV.

"All baloney," he exclaimed.

Well, TV can influence real cops as well, I remember thinking. I thought of a story a cop once told me about a police captain who led a raid on a suspected drug "shooting gallery." Although the place was deserted, the captain found some white powder in a small container in the corner of the dilapidated building. He wet his finger, dipped it in the powder and tasted it.

My cop friend and his brother officers barely contained their laughter as the captain rushed himself to the hospital. Television is so powerful a medium that on occasion even real cops can be found to be emulating their TV fictional counterparts.

During the 10-week course, we were treated like true police recruits and were taught the proper procedures for hot pursuit. Car chases are a stable feature of cops shows. The 1971 Academy award-winning film, The French Connection set the standard that TV and movies have followed ever since. The film is perhaps best known for Gene Hackman's precariously hot pursuit of a killer while driving at high speed under the New York elevated train tracks.

Despite the film being in many other aspects a realistic portrayal of a true crime story, Hackman, portraying a narcotics detective named "Popeye" Doyle, nearly killed several innocent people in the exciting , fast-paced scene. There was no such chase in real life or in Robin Moore's true crime book, on which the film was based. Moore's book, one of my early favorites, chronicled the work of NYPD detectives Eddie Egan and Sonny Grosso, the two lead detectives who cracked in the 1960s what was then described as the world's most crucial narcotics investigation.

The late George V. Higgins, a former assistant U.S. Attorney in Boston and the author of one of our best crime novels, The Friends of Eddie Coyle, ridiculed the film's chase scene. He said at the the time that if a detective working for him had taken such an action, he would have had him checking trashcans for the rest of his limited career.

The Philadelphia police instructors also attempted to dispel any and all notions from TV about the use of deadly force. Nothing in police work is so scrutinized or criticized than a police shooting and death.The instructors came down hard on TV programs like Miami Vice, where the TV detectives routinely shoot and kill several people each week. The regular carnage never seemed to ruffle their psyche or their wardrobe. Police officers rarely draw their sidearm and they rarely shoot or kill anyone. But when they do an investigation follows and the police officer's actions are judged.

But like the Internet, there is both good and bad cop shows on TV. For today's serious student o crime there is much more, and certainly better, coverage of the police and crime.

From network news magazines to the A&E network, where Bill Kurtis reigns as a one man broadcast crime wave, there are countless dramas and documentaries. As the producer and host of Investigative Reports, American Justice and other documentaries, Kurtis offers the intelligent viewer a good inside look at the world of crime.

A&E also offers reruns of several good crime dramas, including British imports like Cracker and Sherlock Holmes. On the networks there are some outstanding crime dramas like NYPD Blue, Law & Order and its spin-off series, and on cable we have The Sopranos. On Court TV they have expanded past the live trial coverage to air reruns of old favorites like Homicide and Wiseguy, as well as COPS and other true crime programs.

Of course, there are still some unrealistic and silly crime shows on the air, but for the discriminating viewer, there are more than a few good choices on TV.

I've come to know many patrol officers, detectives and federal agents over the years of my covering the crime beat. They are, for the most part, ordinary men and women who are sometimes called upon to do extraordinary things. Things that might just make a good TV show.
Posted by Paul Davis at 4:01 AM