When Gangsters Took Over The Big Apple: Inside AMC’s ‘The Making of the Mob: New York’ 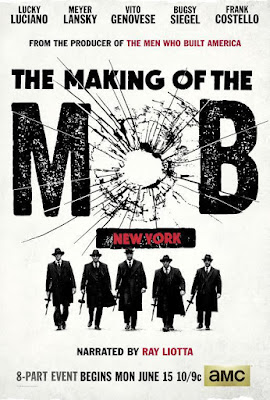 I've not yet watched AMC's The Making of the Mob, but I'll catch up with the series on Comcast On Demand at a later date.

Allen Barra offers his take on the series at the Daily Beast.

AMC’s new eight-part series, The Making of the Mob: New York, goes deeper into the history of American racketeers than just about any previous TV program. The production is billed as a docudrama, meaning it blends narration, archival footage, and dramatic interpretation and reenactment of real-life events.

But sometimes it doesn’t. Part of the problem is that most of the principal characters were portrayed far more vividly in Boardwalk Empire. Nothing against Rich Graff as Lucky Luciano, Ian Bell as Meyer Lansky, or Umberto Celisano as Al Capone, all of whom are capable actors and attractive screen presences, but the script doesn’t allow them to expand on their roles as their predecessors in Boardwalk could.

... What one should take issue with is that most of the “fact” presented in The Making of the Mob is not fact at all, but factoids. In particular, I object to the constant broad use of the word “Mafia.” Historians have long debated the origin of the term, and no one doubts it signified a Sicilian-born criminal organization. But after years of research, I have never seen the slightest credible evidence that the Sicilian Mafia was imported to the United States, or that native Sicilians had any control whatsoever over American crime.

Not only were most of the early mob figures—Rothstein, Lansky, Benjamin “Bugsy” Siegel, Louis “Lepke” Buckhalter, and the most powerful New York gangster of all, Owney Madden (who goes unmentioned in The Making of the Mob)—not Italian, most of the Italians weren’t Sicilians, with Albert Anastasia and Frank Costello both hailing from Calabria. (Costello was born Francesco Castaglia but changed his name to better get along with New York’s police force.). Vito Genovese was Neapolitan, as was Capone, who was in no way a member of the Mafia, though he was known to hire Mafia hit men.