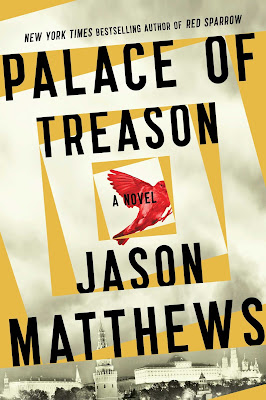 Jeff Stein, the author of a fine nonfiction book about the Vietnam War called A Murder in Wartime, and a writer for Newsweek, offers a piece on Jason Matthews.


The spy was going to be late. In Jason Matthews’s line of work, that was cause for worry. But on this rainy afternoon in Washington, D.C., the former CIA officer was merely dodging traffic, not a Russian trap. And he was rushing to meet a reporter, not a secret agent.
But shedding the cloak and dagger, it turns out, isn’t as easy as trading wingtips for Top-Siders. Both Matthews and his wife, Suzanne, also a former CIA secret agent handler, still look over their shoulders for hostile intelligence agents. It comes from three decades of dodging Russian, Chinese and other adversaries’ counterspies.
“Yeah, the old habits die hard, proving that there is no such thing as a former ops officer,” jokes Matthews, in town to promote his second, much anticipated spy novel, Palace of Treason. ”Suzanne and I notice cars behind us, we come home from parties with the same assessments of people, we still pick up a phone and think, 'It's tapped.'”
... Like his CIA hero in Red Sparrow, which The New York Times called a “startling debut,” Matthews has shed one identity for another with hardly a stutter step. One day shortly after his 2008 retirement, he picked up a pen and started writing. Out came a thriller that drew widespread, even ecstatic praise, with the inevitable comparisons to not just John le Carré and Ian Fleming but Cormac McCarthy and even T.S. Eliot.
At its center is Dominika Egorova, a once promising ballerina forced into training as a professional seductress by cretinous Kremlin intelligence bureaucrats. Egorova is back, of course, in Palace of Treason, this time at the behest of her handsome, self-effacing, equally idealistic CIA handler and rules-breaking lover Nate Nash, for whom she takes nerve-shattering risks, including a stab at seducing Vladimir Putin, who turns out to be plagued by EDS. (Trust me: This is high dark humor.)
You can read the rest of the piece via the below link:
http://www.newsweek.com/spy-novelist-vladimir-putin-world-340400
Posted by Paul Davis at 11:16 PM