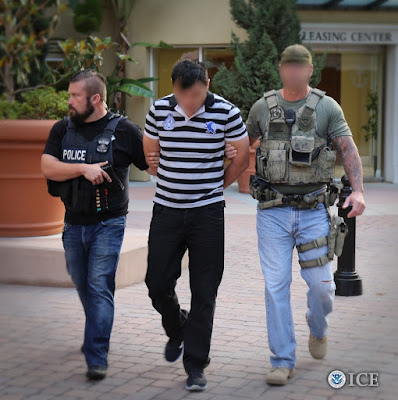 Those arrested are from 13 different countries and wanted for crimes abroad. Of the 27, five are wanted for homicide, two for kidnapping, one for raping a child and one for human sex trafficking.
“Criminals who create mayhem here in the United States or abroad should understand that law enforcement is a global partnership,” said ICE Director Sarah R. Saldaña. “We will find them, and we will bring them to justice.”

Arrests occurred nationwide in nine states during the three-day sweep, which took place Tuesday through Thursday. Those arrested fell squarely into the agency’s enforcement priorities, which ICE officers prioritize and enforce every day.

“The arrest of these foreign fugitives should send a strong message to anyone attempting to avoid prosecution for their crimes here in the U.S. or abroad,” said USMS Director Stacia Hylton. “Our men and women were relentless in their effort to locate and apprehend these criminals.  We hope our effort gives victims a sense of comfort in knowing these individuals are no longer on the streets.”

“Information-sharing 24 hours, seven days a week, 365 days a year among U.S. law enforcement agencies like ERO and the USMS, along with the 189 other Interpol member countries and Interpol Washington, ensures transnational criminals have no place to hide,” stated Interpol Washington Director Shawn A. Bray. “By facilitating the sharing of this information with our law enforcement partners, together, we will continue to enhance safety and security for U.S. citizens and the global community.”

On June 2, ERO arrested Nelson Garcia Orellana, 30, and his brother Jorge Garcia Rivera, 23, both natives of El Salvador, in Trenton, New Jersey, and Alexandria, Virginia, respectively. They are wanted by authorities in their home country for kidnapping [external link] and are the subjects of Interpol Red Notices [external link].

On June 2, ERO arrested Gabriel Collado Gonzalez, 40, a native of Nicaragua, in Miami. Gonzalez is wanted by authorities in his home country for embezzlement and criminal conspiracy and is the subject of an Interpol Red Notice [external link].

On June 2, ERO arrested Raul Ortiz Henriquez, 40, a native of El Salvador, in Santa Fe Springs, California. Henriquez is wanted by authorities in his home country for rape of a minor. In November 2013, Henriquez grabbed his victim by her arms and forced her into a van he was driving while she was leaving school. He drove away, parked, beat her in the chest and raped her. He is the subject of an Interpol Red Notice [external link].

The following individuals are all the subject of Interpol Red Notices and remain at-large:

Juan Chicas Ramos, 56, a native of El Salvador, is wanted by authorities in his home country on an Interpol Red Notice [external link] for homicide

Lisandro Medina Gamez, 33, a native of El Salvador, is wanted by authorities in his home country on an Interpol Red Notice [external link] for fraud

The ICE National Criminal Analysis and Targeting Center (NCATC) provided critical investigative support for this operation, including criminal and intelligence analysis from a variety of sources. The NCATC provides comprehensive analytical support to aid the at-large enforcement efforts of all ICE components.

Members of the public who have information about these fugitives are urged to contact ICE by calling the toll-free ICE tip line at 1-866-347-2423 or internationally at 001-1802-872-6199. They can also file a tip online by completing ICE’s online tip form.