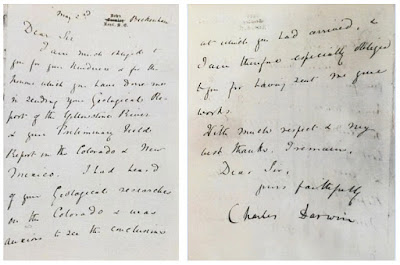 The FBI offers a report on the recovery of a stolen letter written by Charles Darwin.


A handwritten letter by Charles Darwin that was stolen from the Smithsonian Institution Archives more than three decades ago was recovered by FBI special agents and returned last week to the care of the Smithsonian.
The letter, written in 1875 by the British naturalist and geologist best known for his theory of evolution, was stolen in the mid-1970s from a collection of correspondence and documents relating to the history of North American geology. The FBI received a tip about the letter earlier this year, and special agents on the Bureau’s Art Crime Team recovered the artifact. There are no criminal charges pending in the case because the statute of limitations has expired.
“Thanks to a tip from a member of the public, we were able to return this artifact to the care of the Smithsonian Archives,” said Paul Abbate, assistant director in charge of the FBI’s Washington Field Office. On May 26, he turned the letter over to Anne Van Camp, director of the Smithsonian Archives. “It’s a privilege,” Abbate said in a statement, “to return a piece of the history of science and exploration in the United States to the American people.”
The letter, written to American geologist Ferdinand Vandeveer Hayden, was part of the George Perkins Merrill Papers. Merrill was head curator of the Department of Geology in the early 1900s at what is now the National Museum of Natural History in Washington, D.C. Smithsonian conservators worked closely with FBI art crime experts to authenticate the Darwin letter, which went missing before it was cataloged in the Smithsonian Archives. Smithsonian experts were able to compare the letter to another one in their collection that Darwin wrote to Hayden.
You can read the rest of the report and watch a video clip via the below link: