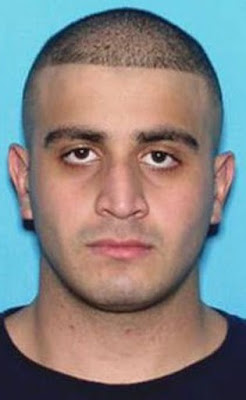 Although President Obama begrudgingly admitted that the mass murder in Orlando, Florida was an act of terrorism (which the FBI had already announced), he was, once again, unable to bring himself to say "radical Islam." He was, however, quite able to once again blame guns.

Blame the gun, not the gunman.

Jamie Schram and Tina Moore at the New York Post offers a piece on the gunman, Omar Mateen (seen in the above photo), noting that he pledged allegiance to ISIS prior to his attack on the Orlando nightclub.


The shooter who killed at least 50 people at a gay nightclub in Orlando has been identified as Omar Mateen, law enforcement sources told The Post.
Mateen was a U.S. citizen with no apparent criminal history, was born to Afghan parents in New York in 1986 and was living in Port St. Lucie, Fla., according to multiple media reports.
Mateen had committed himself to ISIS before carrying out the bloodiest mass murder in US history at a gay nightclub in Orlando on Sunday, federal officials said.
You can read the rest of the piece via the below link: