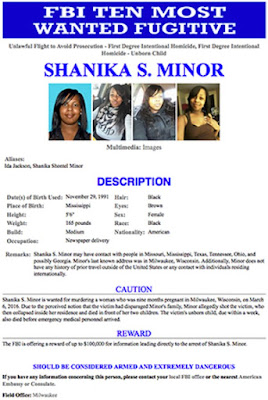 The FBI released a report on the newest Top Ten Fugitive.

A Wisconsin woman charged with killing a pregnant woman and her unborn child has been named to the FBI’s Ten Most Wanted Fugitives list, and a reward of up to $100,000 is being offered for information leading to her capture.

Shanika S. Minor is wanted for the March 2016 murder of her mother’s neighbor in Milwaukee, a 23-year-old who was five days away from her due date. The shooting stemmed from an argument over loud music being played from the victim’s residence.

“Apparently Minor believed that the victim had somehow disrespected her or her mother,” said Special Agent Chad Piontek, who is investigating the case from the FBI’s Milwaukee Field Office. “It is a fairly violent neighborhood,” Piontek said. “Unfortunately, there is sometimes a street mentality about solving problems.”

According to witnesses, on March 5, 2016, Minor instigated an argument with her mother’s neighbor after Minor’s mother had previously said the neighbor was playing loud music at an unreasonable hour. On the sidewalk outside the victim’s residence, Minor brandished a handgun and challenged the neighbor—her former high school classmate—to fight. Minor’s mother ran to the scene and implored her daughter not to hurt the pregnant woman.

Minor fired a round from her gun into the air, got in her car and left the scene. “Most people who witnessed the incident thought that was the end of it,” Piontek said. But it was only the beginning.

You can read the rest of the report and watch a video clip via the below link: