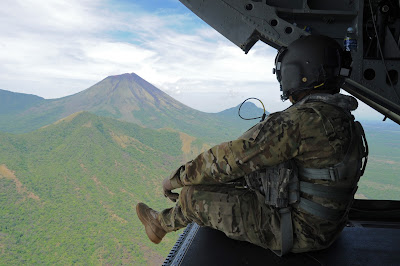 Southcom is responsible for Defense Department security cooperation in the 45 nations and territories of Central and South America and the Caribbean Sea, an area of 16 million square miles. During any given week there are up to 7,000 service members in the region, Tidd said.

The Southcom area of responsibility has been characterized by the absence of ongoing armed conflict between nations for some time,” he noted, “but it's not a region that is without challenges ... [and] the biggest security challenge when you look at Latin America and the Caribbean … is the illicit networks.”

Sometimes the networks are used by criminals, and sometimes by terrorists, but more often the lines blur between them, Tidd said.

To go after the networks, he added, the U.S. military plays a useful role by working with all its partners -- partner nations, U.S. interagency partners, and those in the diplomatic, intelligence and law enforcement communities -- and using experience developed over the past 15 years to detect, illuminate and disrupt the networks.

“The last disruption piece is our own U.S. federal law enforcement agencies that are active down in the region working on our country teams,” he added, noting that “pretty much everything that we do, we do in support of our country teams, of our ambassadors.” 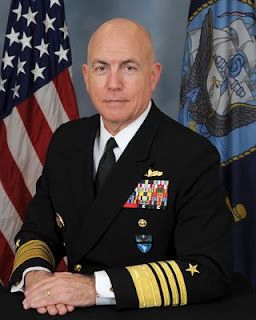 Law enforcement and intelligence communities have determined that most of the terrorist networks engage in some kind of criminal activity to raise money, the admiral (seen in the above photo) said.

As one example, there is longstanding concern in the region about organizations like Hezbollah -- a Shiite Islamist militant group based in Lebanon -- “raising money in one region and funneling it to nefarious activities in other regions, and that certainly continues,” Tidd said.

The networks support illicit activities that include smuggling drugs, wildlife, bulk cash, weapons and people, along with illegal logging and mining.

“Our friends in Colombia have said more money is raised in illegal gold mining than is raised in illegal drug smuggling out of Colombia,” Tidd said, “ ... the way they do this leads to enormous ecological damage, where they destroy river systems and leave them a ruin.”

After the United States and Cuba reestablished diplomatic relations and reopened embassies last July, Tidd said several activities -- the first one a medical interaction -- were identified as useful first steps for Southcom.

A Cuban military medical unit was in Haiti when the Navy hospital ship USNS Comfort made a port visit in September 2015, and ship personnel brought the Cuban medical team aboard for a tour and for discussions about humanitarian assistance activities, the admiral said.

Then, in January, Southcom and Jamaica co-hosted the 14th Caribbean Nations Security Conference, where delegations from 18 nations, including the United States -- and for the first time Cuba -- met in Kingston, Jamaica, Jan. 26-29, for talks on security cooperation and capacity building in the Caribbean.

“It was the first time we were at one of these security conferences together,” the admiral said.
Some initial warming up was required, he added, while the Cuban delegation members were getting used to the idea of listening to broad discussions about security concerns.

“The island of Cuba sits directly astride principal north-south trading routes. Those trading routes also happen to be smuggling routes and Cuba has concerns about illicit trafficking,” Tidd said.
Calling it a first step, the admiral said the timeline will be driven largely by the Cuban government, “because they're not prepared for that degree of openness, frankly, and I think it will take [time] to get to that point.”

According to the Centers for Disease Control and Prevention, Zika virus outbreaks occurred in areas of Africa, Southeast Asia and the Pacific Islands before 2015. In May 2015, the Pan American Health Organization issued an alert regarding the first confirmed Zika virus infections in Brazil. Outbreaks now are occurring in many countries and territories.

On Feb. 1, CDC says, the World Health Organization declared a public health emergency of international concern because of clusters of microcephaly and other neurological disorders in some areas affected by Zika, for which CDC travel warnings include many countries in the Caribbean and Central and South America.

The mosquito-borne vector is well understood in this part of the world, he added, going all the way back to U.S involvement in digging the Panama Canal and dealing with the mosquito-borne viruses responsible for yellow fever and malaria.

“More recently [mosquito-borne diseases] dengue and chikungunya … have a much more immediate deadly impact that we've been paying attention to for some time down there,” the admiral added, “and the protective measures that we take for Zika are the same measures we take for dengue fever and chikungunya.”

Partner nations in the region know what’s required for mosquito eradication, which Tidd called a labor-intensive challenge, particularly in an urban setting.

For the vaccine effort, the Defense Department funds Naval Medical Research Unit No. 6 in Lima, Peru, co-hosted with the Peruvian Navy, he said, noting that the unit is working closely with CDC and other international partners and themselves doing cutting edge work on world class virology and bacteriology studies.

Fewer than five service members are confirmed to have the Zika virus, Tidd said.

One female service member so far has taken advantage of the military policy in place to allow service women or spouses of service members who are living in country to request a transfer, the admiral said.

“We continue to watch it very closely,” he added, “and along with everyone else we're providing pretty vocal guidance about self-protection measures.”