Imbo-Petrone Disappearance May Be Linked To Pagans Outlaw Motorcycle Gang 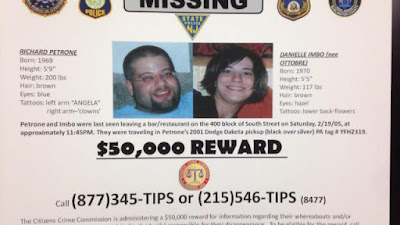 Veteran journalist and author George Anastasia is covering the federal trial of a Philadelphia doctor accused of running a pill mill with an outlaw motorcycle gang and selling pills for sex for Bigtrial.net.

Did the Pagans have something to do with the disappearance of Danielle Imbo and Richard Petrone Jr., a couple last seen leaving a bar on South Street 11 years ago?

The FBI may think so.

In a bizarre twist to what is already a bizarre trial, the Imbo-Petrone disappearance and suspected murder may have been alluded to during a tape played at the pill mill trial of Dr. William O'Brien 3d who is charged with conspiring with the Pagans in a multi-million dollar prescription pill scam.

Back in July Patrick Treacy, a member of the outlaw motorcycle gang, was questioned about a "double homicide," although the victims were not identified.

"I didn't murder nobody," Treacy, 48, said in a taped interview played today for the jury at the pill mill trial. The interview lasted about 40 minutes and was being conducted by FBI Agent Vito Roselli who is handling the Imbo-Petrone investigation.

On the audio and video tape, Roselli urges Treacy to "get ahead of all the bullshit that's going to be coming down" and tells him "in order to help yourself, you gotta clean this up."

There is no direct reference to the Imbo-Petrone investigation and, to further cloud the already murky nature of the trial, there is another double homicide, the 2013 South Philadelphia slayings of Anthony Rongione, 44, and Michael Spering, 52, that sits on the fringe of the pill mill probe.
You can read the rest of the piece via the below link: