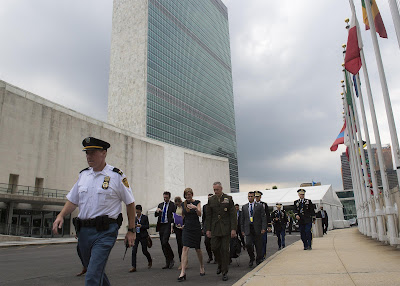 WASHINGTON, June 18, 2016 — Transnational threats require transnational solutions, and the United Nations Peacekeeping Force is a key component of preserving stability, the chairman of the Joint Chiefs of Staff said at the U.N. in New York yesterday.

Marine Corps Gen. Joe Dunford told the U.N. Meeting on Peacekeeping that the current security environment is the most complex and volatile since World War II.

“The challenges we face range from conventional conflict to the proliferation of weapons of mass destruction, from violent extremism to transregional crime, and the character of war has changed,” he said.

But there is a commonality, the chairman said: the threats today are increasingly transnational and transregional.

“The current fight against violent extremism is an example,” he said. “We estimate that over 45,000 foreign fighters from 120 different countries have come to Iraq and Syria. No nation today can turn away and consider violent extremism somebody else’s problem. We have many examples of how the fight can follow us home from fragile states in the form of terrorist acts and the mass migration of those seeking to escape violence.”

In addition, he said, these threats are increasingly multidomain – meaning the threats involve simultaneous action on sea, on land, in the air, in space, and in cyberspace. “And we also see nonstate actors involved in conflict that are able to leverage information, cyber capabilities and sophisticated weapons,” he added.

The sheer scope also increased, Dunford said. Last year, nearly 60 million people were forcibly displaced from their homes by conflict, and the Commission for Refugees estimates that violence will displace more than 40,000 people a day, he noted.

All this begs for multinational cooperation in responding to conflict, the chairman said.
“No longer can conflict be considered something that is ‘over there,’” he said. “While the international community must develop a wide range of capabilities to respond to today’s challenges, we already have a relevant and potentially very effective tool in the form of the U.N. peacekeeping.”

The chairman told the audience he believes the blue helmets worn by U.N. peacekeepers will play a larger role in alleviating the suffering caused by these conflicts, noting that16 different peacekeeping operations are going on around the world, involving more than 121,000 troops, police and civilians. U.N. peacekeepers have been on the job since 1948, and 3,741 have died in these operations. About 120 countries contribute to the organization.

President Barack Obama agrees, Dunford said, and made that point in September when he said, “We know that peace operations are not the solution to every problem, but they do remain one of the world’s most important tools to address armed conflict.” Obama built on that point and has directed the U.S. military to increase its support of U.N. peacekeeping operations, the chairman said.

“Just as the character of war has changed, the nature of U.N. peacekeeping missions has changed,” the general added. “Today, two-thirds of all blue-helmeted peacekeepers are serving in active conflict areas,” he said, “a trend that in my estimation is likely to continue well into the future.”

In the Democratic Republic of the Congo, in South Sudan and in Lebanon, peacekeepers are overseeing refugee relief and ceasefire compliance and are providing security for daily life to return to normal, Dunford said. “As day turns to dusk in Mali,” he added, “peacekeepers wearing blue helmets are providing people with the security they need to return to their communities while preventing the return of violent extremists.”

Though the United Nations can be proud of what the peacekeepers have accomplished, “we will get no credit tomorrow for what we did yesterday,” Dunford said.

Future, U.N. peacekeepers must be capable of defending themselves, protecting civilians and carrying out their mandate in the context of very dynamic security environments, the chairman said. “In short,” he added, “to meet what I believe will be a growing demand for more complex peace operations, we’re going to need to adapt. Meeting the growing demand for a wide range of peacekeeping operations requires a robust set of capabilities and capacities.”

The foundation of any mission is quality, disciplined people with the right skills, Dunford said.

“I’d like to highlight there’s a growing need for women to serve as peacekeepers,” he said. “During my deployments to Iraq and later as the commander of the International Security Assistance Force in Afghanistan, I learned firsthand that women are an important part of an effective response to today’s challenges. Women not only add to the capability of our own forces, they have a unique ability to connect with local populations in areas of instability.”

The peacekeeping operation is not without flaws, Dunford said, and he urged the organization to address them.

“I think it’s clear to all of us that the U.N.’s record in this area has been mixed – and there’s a lot of reasons for that mixed record, but chief among them is the hard reality that U.N. peacekeeping missions deal with some of the most challenging and protracted issues on the planet,” he said. “But while many of the challenges are due to the nature of the conflicts, there’s other challenges that should concern us all. Problems of ill-disciplined units conducting criminal acts, including sexual assault, problems with corruption, and shortfalls in equipment cannot be blamed on the environment.”

Addressing those challenges is within the U.N.’s control, the chairman said. “We have to do that, because they threaten our collective legitimacy and our effectiveness,” he added. “To much of the world’s population, a soldier or policeman wearing a blue helmet and a U.N. patch represents their last best hope for safety and security, and we must work to ensure that image and hope isn’t diminished.”


“This is a personal priority for me, the United States’ Joint Chiefs of Staff, and the entire U.S. joint force,” he said. “The priority we place on U.N. peacekeeping operations is consistent with our view that these operations make an indispensable contribution to international security.”

Note: In the top DoD photo taken by Navy Petty Officer 2nd Class Dominique A. Pineiro, Marine Corps Gen. Joe Dunford, chairman of the Joint Chiefs of Staff, and Samantha Power, U.S. Ambassador to the United Nations, depart the U.N. in New York City on June 17, 2016.
Posted by Paul Davis at 9:54 AM