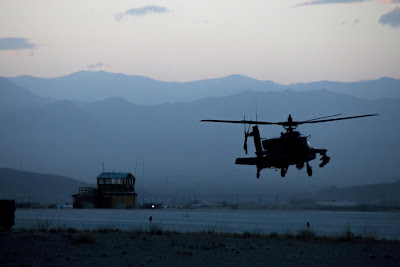 The DoD News offers the below report:

"Commanders have used the Apache capability that we positioned there and that [President Barack Obama] authorized them to use some months ago," Carter said as he traveled to Brussels for meetings with his fellow NATO defense ministers. .

An ISIL target in Iraq was destroyed in an Apache strike, Carter said, noting this is the "first time that it's been called into action, and effectively" in the ISIL fight.

U.S. and Iraqi commanders decided the aircraft "could be effective in helping those forces that are positioning themselves for the two-forked envelopment of Mosul," Carter said.

"That's what it was used for -- to help them along their way," he added.

The June 12 strike was in support of Iraqi security forces operating in the Tigris River Valley, a Defense Department spokesman said, adding that the strike was vetted and approved through the same process the coalition uses for all strikes.

Note: In the above A U.S. Army photo taken by Staff Sgt. Ian M. Kummer, AH-64 Apache helicopter from the 3rd Combat Aviation Brigade takes off from Forward Operating Base Dahlke, Afghanistan on May 18, 2016.
Posted by Paul Davis at 2:53 PM