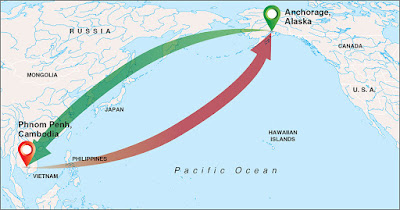 
A tip to police from a concerned citizen in Anchorage, Alaska led to an FBI investigation that stopped a sexual predator from victimizing children in Cambodia—and landed the offender behind bars for a lengthy sentence.
In March, a federal judge sent 45-year-old Jason Jayavarman to prison for 18 years for attempting to sexually exploit children in Cambodia over a period of years and attempting to arrange a child sex tourism trip there for himself and others.
Jayavarman’s crimes were “horrific,” said Special Agent Jolene Goeden, who investigated the case from the FBI’s Anchorage Division. In 2012, the Bureau was contacted by the Anchorage Police Department after a Crime Stoppers tip alerted the police to the possibility that Jayavarman was making frequent trips to his native Cambodia to have sex with children—an illegal act.
A preliminary investigation revealed that Jayavarman, who owned and operated a popular youth hostel in Anchorage and who has dual citizenship in the U.S. and Cambodia, had made at least a dozen such trips between 2010 and his arrest in 2013. During that time, it was later learned, he produced videos of himself having sex with a child victim.
As part of the investigation, an undercover source posed as a man interested in a child sex tourism trip. Over a period of months, Jayavarman “talked very openly about production of child pornography in Cambodia, how to smuggle that pornography back into the U.S., and about his connections in Cambodia and how he could procure young children for his friends—some as young as 12 years old,” Goeden said.
Jayavarman was arrested before he could travel overseas again, “but he had purchased his tickets along with those of the undercover source he believed would be accompanying him,” Goeden noted.
A search of Jayavarman’s house revealed child pornography, and from that evidence, investigators were able to identify one of the child victims in Cambodia. “We tracked her down in a mountain village in the middle of nowhere,” Goeden explained, “and we were able to interview her.”
Investigators learned that the victim was 14 years old when Jayavarman first began sexually abusing her. A year later he began making pornographic videos with her and ultimately recorded more than eight hours of him having sex with the girl.
After his arrest, Goeden said, Jayavarman discussed how it was common for extremely poor, young Vietnamese and Cambodian girls to be traded to traffickers by their families for food. Many are brought from their rural villages to the Cambodian capital, Phnom Penh, which is where Jayavarman had first met the young victim.
“He was definitely a predator,” Goeden said. During recorded conversations with the undercover source, “Jayavarman went on in detail about how to groom a child and what to do to a child,” she said. “It was incredibly graphic and very disturbing.”
Child sex tourism is a serious crime, Goeden added, “and it happens more than we realize. Some people think that what they do overseas can stay overseas, but that is not the case. The FBI is serious about stopping those who sexually exploit children, no matter where the crimes are committed.”
Posted by Paul Davis at 6:29 AM