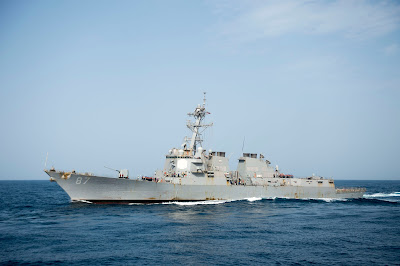 Sam LaGrone at USNI News reports on the unsuccessful attack on a U.S. Navy ship off Yemen.


The guided-missile destroyer USS Mason (DDG-87) was unsuccessfully attacked with two missiles fired from Yemen on Sunday, Pentagon officials told reporters early Monday morning.
Mason was near the strait of Bab el-Mandeb in international waters when two missiles were fired from shore around 7 P.M. local time on Sunday, Pentagon spokesman Capt. Jeff Davis said to reporters.
“USS Mason detected two inbound missiles over a 60-minute period while in the Red Sea off the coast of Yemen. Both missiles impacted the water before reaching the ship,” Davis said, reported Reuters.
“There were no injuries to our sailors and no damage to the ship.”
You can read the rest of the piece via the below link:

Note: The USS Mason appears in the above U.S. Navy photo.
Posted by Paul Davis at 7:46 AM