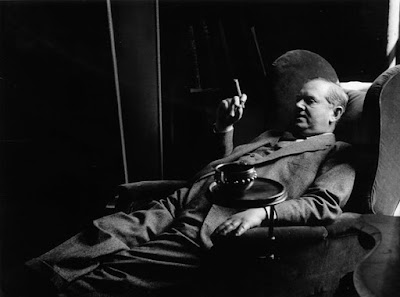 As Biography.com notes, today is the birthday of one of my favorite writers, the late, great Evelyn Waugh, author of Brideshead Revisited, the Sword of Honour trilogy, and my favorite novel about journalism, Scoop.

You can read about his life and work via the below link: 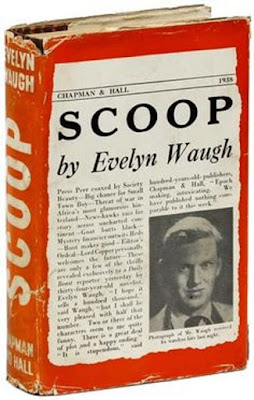 In an interview with the online publication The Daily Beast (which takes the name from Waugh's novel Scoop), the conservative humorist P.J. O'Rourke explained why he was calling his Daily Beast column Up To a Point.
The most famous book among all foreign correspondents is Evelyn Waugh’s Scoop. The newspaper in Scoop is, of course, The Daily Beast, which is owned by the moronic Lord Copper and run by the obsequious Mr. Salter.

There’s a brief passage which I think all reporters know. “Whenever Lord Copper was right, Mr. Salter would say, ‘Definitely, Lord Copper,’ and whenever Lord Copper was wrong, Mr. Salter would say, ‘Up to a point, Lord Copper.’” Then follows a little snatch of dialogue where Lord Copper says, “Hong Kong—belongs to us, doesn’t it?” “Definitely, Lord Copper.” “Yokohama—capital of Japan, isn’t it?” “Up to a point, Lord Copper.”
Great stuff.
I discovered Waugh in my early 20′s in the mid-1970s when I was stationed on a Navy tugboat at the U.S. nuclear submarine base at Holy Loch, Scotland.
I was an aspiring writer at the time and I planned to major in journalism when I left the Navy, so I purchased a Penguin paperback of his brilliant satire of journalism, Scoop. I thought it was a great satirical novel, and I’ve reread it again and again over the years.
I later discovered that much of Scoop was based on Waugh's true experiences as a newspaper correspondent in Ethiopia. That made the novel even more funny and powerful to me.
I went on to read Waugh's other satirical novels, such as Black Mischief and Decline and Fall, as well as his great World War II Sword of Honour trilogy: Men at Arms, Officers and Gentlemen and Unconditional Surrender.

I also read his classic novel, Brideshead Revisited, the rest of his novels, his diary and several books about him.
A decade later, my wife and I enjoyed watching the weekly television installments of Brideshead Revisited on PBS.
By all accounts and his own admission, Waugh was not a pleasant man, but he was a brilliant writer. And he was funny.
He even satirized himself in The Ordeal of Gilbert Pinfold.
Waugh told a great story of how he had to endure sitting next to a man on a long train ride who was reading one of his satirical novels. Waugh said he was compelled to watch the man turn each page as he read, not laughing or smiling, even for an instant.
Had Waugh sat next to me on a train while I was reading one of his novels, he would have seen me smiling and even laughing out loud.
If you have not read Waugh, I suggest you start with Scoop and then read all of his works.
Posted by Paul Davis at 10:18 AM