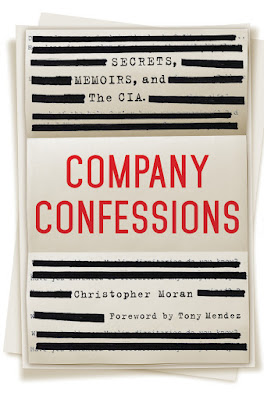 Joseph C. Goulden is a fine writer and book reviewer. I've interviewed the veteran journalist and author several times and I've kept up a steady correspondence with him over the years.

I've enjoyed his books, like The Death Merchant and Korea: The Untold Story of the War. I also enjoy his book reviews in the Washington Times, as he is knowledgeable and fair.

In his review of Christopher Moran's Company Confessions: Secrets, Memoirs, and the CIA, Mr. Goulden, an authority on intelligence matters, points out "silly errors" and a left-wing bias towards the CIA.,

And I had to laugh at his final line in the review, "Essentially a waste of time. Don't bother."

Pity, as the subject of the book sounds interesting.


Say the words “Publications Review Board” within earshot of a retired CIA officer, and his reaction is likely to the same as if you goosed him with an electric cow prod: a harsh frown, and perhaps an explosive epithet. The PRB is the in-house office that has go/no-go authority over permission to publish anything the officer writes for public distribution, be it a letter to the editor or a memoir.
Such makes good sense: Intelligence is a trade one does not babble about on the village green, and those who enter it know the rules about secrecy. Veterans recognize the value of pre-publication review — in theory, at least — but by no means are they universally happy with the process.
Christopher Moran, a British writer, explores the history of publications review dating from the end of World War II, when veterans of the Office of Strategic Services, the CIA’s predecessor, flooded bookstores with memoirs and helped Hollywood produce a rash of movies that sensationalized the realities of intelligence beyond recognition.
The founding barons of the CIA, understandably, wished to be portrayed as something other than a gang of gun-slinging killers — and also to protect the sources and methods of tradecraft that should not be disclosed to adversaries. As Mr. Moran correctly observes, secrecy is “an essential element of successful operations.” The National Security Council laid down the rules in 1950: “Any publicity, factual or fictional, concerning intelligence is potentially detrimental to the effectiveness of an intelligence activity and the national security.”
Hence the requirement that any person who enters the intelligence community, be it the CIA or elsewhere, is required to sign a secrecy agreement. Violators face prosecution.
You can read the rest of the review via the below link:
http://www.washingtontimes.com/news/2016/oct/11/book-review-company-confessions-secrets-memoirs-an/
Note:  Read the review, skip the book.
Posted by Paul Davis at 3:04 AM