CNN On Democratic Governor McAuliffe’s Donation To Wife Of FBI Official ‘Deeply Involved’ In Clinton Email Probe: ‘It Sure Stinks’ 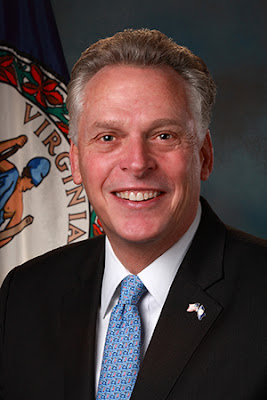 Chandler Gill at the Washington Free Beacon offers a piece on CNN's response to a Wall Street Journal story that Democratic Governor McAuliffe of Virginia (seen in the above photo), a Hillary Clinton supporter, donated to the political campaign of a woman married to a key FBI official involved in the Clinton email investigation.


CNN’s John King said Monday that the campaign donation of Virginia Gov. Terry McAuliffe’s (D.) political action committee to the wife of an FBI official who investigated Hillary Clinton’s private email server “sure stinks.”
King discussed how Republicans still think Clinton is a flawed candidate, citing her email scandal and subsequent investigation, along with the ongoing WikiLeaks releases of hacked emails from her campaign chairman’s account.
He then mentioned a new Wall Street Journal story about McAuliffe’s $467,500 campaign donation.

The political organization of Virginia Gov. Terry McAuliffe, an influential Democrat with longstanding ties to Bill and Hillary Clinton, gave nearly $500,000 to the election campaign of the wife of an official at the Federal Bureau of Investigation who later helped oversee the investigation into Mrs. Clinton’s email use.
Campaign finance records show Mr. McAuliffe’s political-action committee donated $467,500 to the 2015 state Senate campaign of Dr. Jill McCabe, who is married to Andrew McCabe, now the deputy director of the FBI.