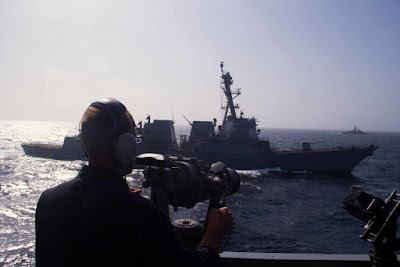 “These strikes were in response to attempted missile attacks in recent days against USS Mason and other vessels in the Red Sea and Bab el Mandeb,” Cook said.

Cook said the U.S. strikes were launched from the USS Nitze, an Arleigh Burke-class destroyer operating in the Gulf of Aden.

“These targets were chosen based on our assessment that they were involved in missile launches in recent days, and they were struck in order to defend our ships and their crews and to protect freedom of navigation through a waterway that is vitally important to international commerce,” Cook said.

The press secretary emphasized two points: the strikes were in response to a threat to U.S. vessels and to freedom of navigation, a core U.S. security interest. Secondly, “that those who might threaten U.S. forces should recognize that we will not tolerate threats to our people.”

The strikes were not connected to the broader conflict in Yemen, Cook said, adding, “The United States continues to encourage all parties in the Yemen conflict to commit to a cessation of hostilities and to seek a political solution to that conflict.”

More than four million barrels of oil pass through the Bab el Mandeb each day, he noted.
“This narrow passage is a vital link connecting Asia and Europe,” Cook said. “Safe navigation through the strait is vitally important to economies in the region and to global commerce.”

Those who threaten American forces should realize the United States doesn’t “tolerate threats to our people,” Cook said.

“We will respond if our forces come under fire,” the press secretary said. “We have taken swift action in this case, and should we see a repeat, we are prepared to take appropriate action at the appropriate time.”