The Flame Bearer: Bernard Cornwell On How Meeting His Real Father Inspired A Saxon Epic 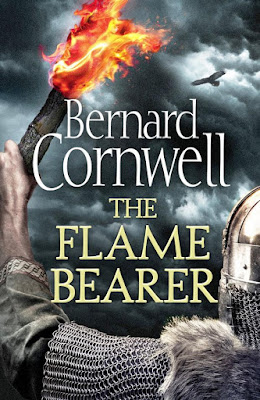 Stephen Lewis at the British newspaper the York Press offers a piece on how author Bernard Cornwell came to write a series of historical novels on the Saxons and a character called Uhtred of Bebbanburg..


THERE aren’t many characters in modern historical fiction that grab you by the throat the way Bernard Cornwell’s Uhtred of Bebbanburg does. He’s foul-mouthed, lustful, bad tempered, and soaked in the blood of the enemies he’s slaughtered. But he also has a great way with words, talking straight to the reader like an actor confiding to camera.
How about this, from the opening page of The Pale Horseman, the second in Cornwell’s series of novels set during the time of King Alfred, which have been turned into the BBC series The Last Kingdom.
“These days I look at twenty-year-olds and think they are pathetically young, scarcely weaned,” Uhtred, the novel’s narrator, begins. “But when I was twenty I considered myself a full-grown man. I had fathered a child, fought in a shield wall and was loathe to take advice from anyone. In short, I was arrogant, stupid and headstrong..."
Through the course of nine novels, Uhtred gets older and more grizzled but not much wiser as he fights, plunders and murders his way through a Dark Ages England torn by savage wars between the Saxons and the invading Danes, or Vikings. Along the way, he also manages to become King Alfred’s most fearsome warrior-general. Which is interesting, because he hates Alfred, and all Christians, as pious hypocrites.

You can read the rest of the piece via the below link:
http://www.yorkpress.co.uk/news/14792892.Bestseller_Bernard_Cornwell_s_got_a_date_in_York/

Note: Although the series on Uhtred is interesting and entertaining (and I also enjoyed the BBC TV series adapted from the novels), I wish Bernard Cornwell would return to writing about Richard Sharpe, his roguish hero from the Napoleonic Wars.

I interviewed Bernard Cornwell about Sharpe a while back and you can read my Crime Beat column via the below link:

http://www.pauldavisoncrime.com/2012/12/a-q-with-sharpe-creator-bernard-cornwell.html
Posted by Paul Davis at 6:12 AM