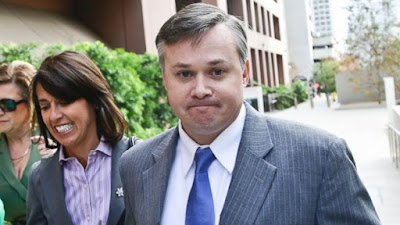 Lee Ferran at abc7chicago.com offers a piece on the trial of a former Naval Criminal Investigative Service special agent involved with the massive U.S. Navy bribery and fraud case.

He was lonely. He needed a girlfriend. He needed father figure. He was suffering from physical ailments. He has mental disorders. He drank too much. He was tired. He was weak. And when he was at his absolute lowest point, he was preyed upon.That's how attorneys for John Beliveau say the former Naval Criminal Investigative Service (NCIS) agent was seduced into becoming a mole in the law enforcement agency for a Malaysian kingpin in one of most widespread corruption cases in U.S. military history.
"In the instant offense, severe mental illness and compromised judgment, rather than greed, motivated Mr. Beliveau," the attorneys argued in a recent court filing, painting a pitiful picture of their client before a sentencing hearing Friday. The defense wants a year's home confinement followed by supervised release. "He was weak and vulnerable, and in his compromised state, he exercised terrible judgment."
Prosecutors aren't buying it and called the defense's request an "insult." They want him to serve 15 years in prison.

You can also read an earlier post on the Fat Leonard U.S. Navy bribery and fraud case via the below link: