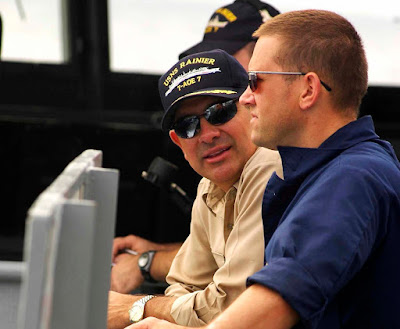 The U.S. Attorney for the Southern District of California released the below information on August 18, 2017:

Twenty-eight individuals, including 21 current and former Navy officials and five civilian defendants, plus GDMA, the corporation, have been charged so far as part of the massive fraud and bribery investigation. Nineteen of these defendants have pleaded guilty. Nine defendants await trial.

Cantu, 59, of Silverdale, Washington, pleaded guilty to one count of conspiracy to commit bribery and is scheduled to be sentenced on November 9, 2017 before U.S. District Judge Janis L. Sammartino.

In his plea agreement, Cantu acknowledged that Francis took him and others out for drinks and dinners at posh restaurants, nightclubs and karaoke bars and paid for lavish hotel rooms and the services of prostitutes on numerous occasions in 2012 and 2013. Cantu admitted that he provided proprietary U.S. Navy information to Francis, and that he used his power and influence to help Francis and GDMA with their business.

“The number of U.S. Navy officials who participated in this conspiracy is astounding,” said Acting U.S. Attorney Alana W. Robinson. “Like so many others, this defendant sold out the Navy and his country for cocktails and karaoke. We are pressing forward in this investigation until we are certain that all involved have been held accountable.”

“The guilty plea of Jesus Cantu is another sad chapter in the largest fraud and corruption scandal in the U.S. Navy's history,” said Dermot O'Reilly, Deputy Inspector General for Investigations, Office of Inspector General, Department of Defense. “While the conduct of the vast majority of U.S. Navy personnel is beyond reproach, the unfortunate truth is that for years Leonard Francis and Glenn Defense Marine Asia, compromised the integrity of numerous members of the U.S. Navy. This investigation continues, and the Defense Criminal Investigative Service and its law enforcement partners will relentlessly pursue those individuals involved in this massive corruption scandal.”

NCIS Director Andrew Traver said of today’s events, “Captain Cantu, like others caught up in the GDMA scandal, dishonored his sworn oath of office. NCIS, in concert with our partner agencies, remains resolved to following the evidence wherever it may lead, to help hold accountable those who choose personal gratification over duty and professional responsibility.”

According to his plea agreement, Cantu served in the Navy until 2014. During the time he was accepting bribes from Francis in 2012 and 2013, Cantu was the deputy commander, Military Sealift Command (MSC) Far East in Singapore. He oversaw the MSC ships that provided logistical sustainment to Navy ships operating in the Seventh Fleet.

Cantu also admitted in his plea agreement that, in 2007, when he was the Assistant Chief of Staff for Logistics for the Commander of the U.S. Navy’s Seventh Fleet aboard the USS Blue Ridge, he and others participated in a bribery conspiracy with Francis. Cantu and other members of the conspiracy accepted more than $135,000 in meals, entertainment, travel and hotel expenses, and the services of prostitutes from Francis; in exchange, they worked together to help Francis as issues important to his business arose.

The U.S. Navy’s Seventh Fleet represents a vital piece of the United States military’s projection of power as well as American foreign policy and national security. The largest numbered fleet in the U.S. Navy, the Seventh Fleet comprises 60-70 ships, 200-300 aircraft and approximately 40,000 Sailors and Marines. The Seventh Fleet is responsible for U.S. Navy ships and subordinate commands that operate in the Western Pacific throughout Southeast Asia, Pacific Islands, Australia, and Russia and the Indian Ocean territories, as well ships and personnel from other U.S. Navy Fleets that enter the Seventh Fleet’s area of responsibility. The USS Blue Ridge is the command ship of the Seventh Fleet and houses at-sea facilities for Seventh Fleet senior officials.

Also charged are five GDMA executives – Francis, Alex Wisidagama, Ed Aruffo, Neil Peterson and Linda Raja. All have pleaded guilty; Wisidagama was sentenced on March 18, 2016 to 63 months and $34.8 million in restitution to the Navy; Peterson and Raja were extradited from Singapore in 2016 and sentenced on August 11 to 70 months and 46 months in prison, respectively. Francis and Aruffo await sentencing.

Assistant U.S. Attorneys Mark W. Pletcher and Patrick Hovakimian of the Southern District of California and Assistant Chief Brian R. Young of the Criminal Division’s Fraud Section are prosecuting the case.
Posted by Paul Davis at 10:23 AM