Is Someone Hacking Our 7th Fleet? Navy To Investigate After USS John S McCain Collision 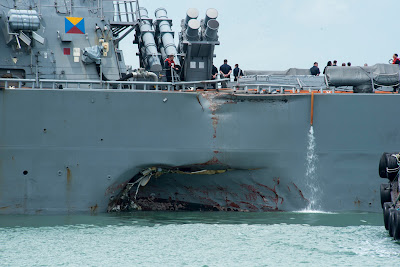 Are the recent U.S. Navy 7th Fleet ship collisions due to our Navy ships being hacked by an adversary? Russia? China? North Korea? Iran?

Or are the collisions simply due to an eight-year degrade of military standards, where Obama’s top policy leaders were far more interested in forcing social change than warfighting, and sailors attended far more sensitivity and other social-awareness training than ship handling training? We shall see.

Edmund DeMarche at foxnews.com offers a piece on the U.S. Navy looking to a possible cyber-attack and other reasons for the collision.

A top U.S. Navy admiral on Monday called for a swift and thorough investigation into Monday's collision of the USS John S. McCain into an oil tanker near Singapore-- marking the second deadly mishap that occurred in the Pacific in the past three months.

Adm. John Richardson ordered an operational pause in all the fleets around the world while the Navy works to determine the factors behind the collision. Richardson tweeted that the Navy will conduct a wide investigation, including a review into the possibility of "cyber intrusion or sabotage."

You can read the rest of the piece and watch a video news clip via the below link:

Note: The above U.S. Navy photo shows the damaged USS John S. McCain.
Posted by Paul Davis at 8:38 AM