My Washington Times Review Of 'Three Minutes To Doomsday: An Agent, A Traitor, And The Worst Espionage Breach In History' 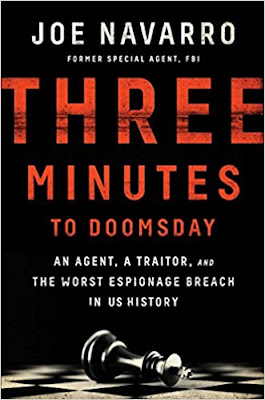 The Washington Times ran my review of Joe Navarro’s Three Minutes To Doomsday: An Agent, a Traitor, and the Worst Espionage Breach in History.

Clyde Lee Conrad and Rodney Ramsey may not be as well-known as Aldrich Ames, Robert Hanssen, John Walker or other infamous spies and traitors, but according to Gen. Glenn K. Otis, the commander in chief of the U.S. Army European Command from 1983 to 1988, their acts of espionage had left the West so vulnerable and stripped of its own defensive capabilities that its defeat would have been assured had the Soviets acted on their intelligence and launched an all-out war.

Conrad, Ramsey and others in this spy ring gave the Soviets American’s defensive war plans, nuclear launch codes and other military secrets. It was a devastating breach of security.

As former FBI Special Agent Joe Navarro recounts in his book, “Three Minutes to Doomsday: An Agent, a Traitor, and the Worst Espionage Breach in History,” he became involved in this decade-long espionage investigation on Aug. 23, 1988 when he was instructed to locate and interview Roderick James Ramsey.

The message stated that Ramsey was last known to be living in Tampa, Florida, and Agent Navarro was to interview him “regarding his knowledge of or association with Clyde Lee Conrad, while stationed at 8th ID, Bad Kreuznach, West Germany: service years 1983-85. INSCOM (Army Intelligence) will liaise and assist: locate, interview, report.”

Mr. Navarro, who in 1988 served as a member of the FBI’s SWAT team and flew night aerial surveillance as well as his counterintelligence duties in the FBI’s Tampa, Florida office, located Ramsey, who was living in his mother’s trailer. He then began a long game of wits with the highly intelligent, narcissistic and manipulative former enlisted soldier.

http://www.washingtontimes.com/news/2017/aug/10/book-review-three-minutes-to-doomsday/
Posted by Paul Davis at 12:45 AM