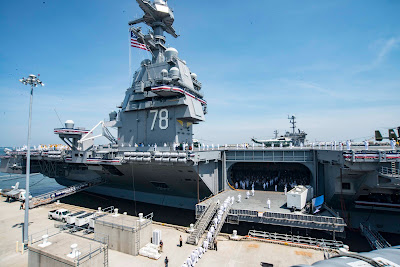 The Washington Times published my piece on the commissioning of the aircraft carrier USS Gerald R. Ford and why carriers are important to America’s freedom.

As an old Navy man who served as a young enlisted sailor on the aircraft carrier USS Kitty Hawk during the Vietnam War, I was pleased and proud to see the U.S. Navy’s newest aircraft carrier, the USS Gerald R. Ford (CVN 78), join America’s fleet.

Last month President Trump, Defense Secretary Jim Mattis and other dignitaries attended the commissioning of the USS Gerald R. Ford, the Navy’s latest nuclear-powered supercarrier, at the Norfolk naval base. The new carrier was named in honor of President Ford, who served on an aircraft carrier during World War II. His daughter, Susan Ford Bales, the ship’s sponsor, was also in attendance.

“The USS Ford is a magnificent warship that joins the best Navy in the world,” Mr. Mattis said at the ceremony. “It is named after a tried-and true member of the Greatest Generation, and that spirit will permeate this ship so long as it sails on the seas, as well as the U.S. Navy spirit of ‘We have just begun to fight,’ ” he said.

Mr. Trump stated that a ship is only as good as the people who serve on it, and he said the American sailor is the best in the world. 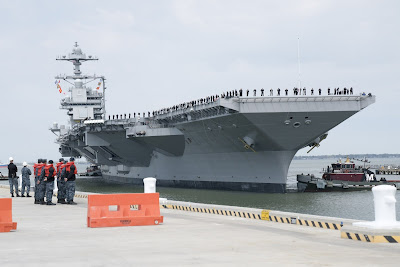 … According to the U.S. Navy, the aircraft carrier remains as the centerpiece of our forward-operating forces. Often the presence of an aircraft carrier has deterred potential adversaries from striking against U.S. interests. Aircraft carriers employ aircraft that engage in attacks on airborne, afloat and shore targets, as well as engage in sustained power projection operations in support of U.S. and coalition forces. The aircraft carrier and its strike group also engage in maritime security operations to interdict threats to merchant shipping and prevent the use of the seas for terrorism and piracy. Aircraft carriers also provide unique capabilities for disaster response and humanitarian assistance.

Note: You can click on the above U.S. Navy photos to enlarge.
Posted by Paul Davis at 11:56 PM