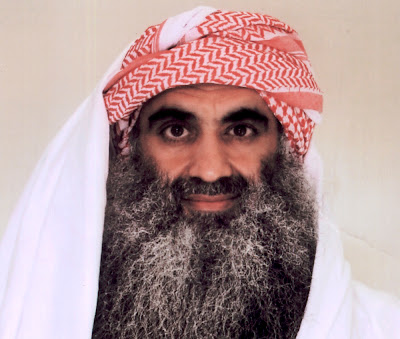 FORT MEADE, Md., Oct. 17, 2012 - The self-described mastermind in the 9/11 terrorist attacks condemned the military commissions process today for the second time since the pre-trial hearings for him and four other codefendants began this week.

Army Col. James Pohl, the judge overseeing the case of Khalid Sheik Mohammed and four others charged with planning and conducting the 9/11 attacks, gave Mohammed the
opportunity to address the court at Naval Air Station Guantanamo Bay, Cuba.

The defendant, wearing a camouflage vest Pohl granted him permission to wear and arriving late for court today after initially electing to skip it, unexpectedly raised his hand during the afternoon session indicating that he wanted to speak.

Pohl called a recess so his defense team could ascertain their client's intention before giving Mohammed the floor.

Speaking through an interpreter, Mohammed accused the U.S. government of using national security concerns as a guise to circumvent a legitimate legal process. He said the prosecution is being subjective about what activities it conducts and information it protects in the interest of national security.

"Your blood is not made out of gold and ours out of water," he charged.

Pohl, clearly not anticipating the tirade, made clear that it won't tolerate others. "This is a one-time occurrence," he told David Nevin, Mohammed's learned counsel, after Mohammed finished speaking.

Pohl emphasized that he would never allow the court proceedings to be disrupted again to allow any of the defendants to express their personal thoughts about how the proceedings are going.
He also underscored that his failure to interrupt Mohammed should not be construed as an endorsement of anything he said.

Mohammed's commentary was the second time this week that he condemned the military commission process. During the first day of pre-trial hearings, he told Pohl, "I don't think there's any justice in this court."

Mohammed's comments came at the end of a day in which only one of the five 9/11 defendants, Ali Abdul Aziz Ali, initially elected to attend court. Mohammed skipped yesterday's session and initially opted do the same today. However, he informed the guards that he had changed his mind and appeared in court an hour-and-a-half into today's session.

All five of the defendants were captured in Pakistan between 2002 and 2003 and have been confined at Guantanamo Bay since 2006.

The third day of their pretrial hearings continued to focus today on the balance between protecting classified information that, if made public, could jeopardize U.S. national security, and the constitutional mandate to make court proceedings public.

Hina Shamsi, representing the American Civil Liberties Union, argued this morning that the proceedings should be open, objecting to measures she called "categorical suppression of information that has largely been made public."

Shami called the closed sessions, and a 40-second delay in the audio feed, an attempt to censor the defendants' testimony about their torture and detention while in U.S. custody, particularly by the CIA.

Later in the day, the court security officer demonstrated how this works, cutting the microphone to Navy Lt. Cdr. Kevin Bogucki, Binalshibh's military counsel, when Bogucki referred to enhanced interrogation methods. As it became clear that Bogucki was speaking in hypothetical terms, the CSO restored the audio and Pohl asked Bogucki to repeat what he had said for the court record.

James Connell, Ali's learned counsel, told Pohl he believes the defense teams has the right and obligation to challenge the classification of information relevant to their cases. He said previous questions to the convening authority about why some information is classified have been met with "silence."

Department of Justice attorney Joanna Baltes argued that protective measures are required so the government can prosecute the case without disclosing classified information that threatens U.S. national security. She said these measures, including the audio delay and soundproof gallery for court observers, are the only reason the sessions can be as open as they are.

Baltes also defended a protective order the prosecution has requested to ensure that the U.S. government is able to prosecute the case without compromising national security interests.

Pohl is expected to rule on a protective order tomorrow.