Todd Rundgren Live, Then And Now 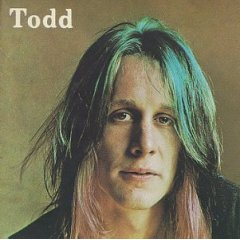 Thanks to youtube.com we can listen to him perform live from the 1970s to today.

You can watch Todd Rundgren sing A Dream Goes On Forever on the 1970's British rock TV program The Old Gray Whistle Test via the below link:

I used to watch The Old Gray Whistle Test when I was in the U.S. Navy and stationed in Scotland in the mid-1970s. (The name of the program comes from Tin Pan Alley, where the record producers would play a record for the elderly doormen in grey suits. If the doormen could whistle the tune after hearing the recording, the producers would say the song passed "the old grey whistle test").

You can also see Todd Rundgren perform I Saw the Light with Daryl Hall and a very good house band on Live From Daryl's House, a very good Internet musical program, via the below link:

And you can also see Todd Rundgren perform It Wouldn't Have Made Any Difference with Daryl Hall and the band via the below link:

And you can link to some of Todd Rundgren's old songs via an earlier post:

http://pauldavisoncrime.blogspot.com/2012/02/hello-its-me-taste-of-todd-rungren.html
Posted by Paul Davis at 6:12 AM

Labels: A Dream Goes On ForeverIt Wouldn't Have made Any Difference, Daryl Hall, Hall and Oates, I saw the light, Live From Daryl's House, The Old Grey Whistle Test, Todd Rundgren