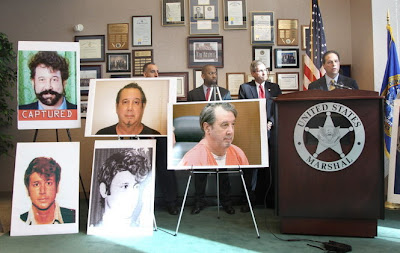 ABC News reports on the arrest of the alleged con artist who is suspected of ripping off veterans through charity schemes.

Authorities revealed today that they believe "Bobby Thompson," the man accused of using a fake veterans charity to swindle more than $100 million and to rub shoulders with top-level Republicans, is actually a former military intelligence officer named John Donald Cody.

Officials said Cody has been on an FBI watch list for 25 years after being accused of various frauds and was wanted for questioning related to an espionage investigation.

U.S. Marshal Peter Elliott told reporters that he discovered Cody while searching through old FBI Wanted posters. He said details about the two identities kept matching up, from his unusual hairstyle, his history in the state of Arizona, and his knowledge of the law. Cody, Elliot said, had graduated from Harvard Law School.

You can read the story and watch the news report via the below link:

http://abcnews.go.com/Blotter/feds-notorious-alleged-con-man-bobby-thompson-military/story?id=17365035
Posted by Paul Davis at 3:32 AM