Pretrial hearing Kick Off For 9/11 Defendants 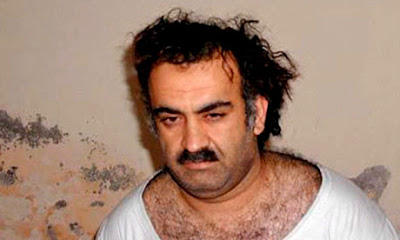 FORT MEADE, Md., Oct. 15, 2012 - Khalid Sheikh Mohammed, the self-proclaimed mastermind behind the 9/11 terrorist attacks (seen in the above photo shortly after his arrest), and four co-defendants charged with planning and carrying out the attacks have the right to skip court proceedings regarding their case, Army Col. James Pohl, the judge, ruled today.

Pohl's decision kicked off a week of pretrial hearings that opened today at Naval Station Guantanamo Bay, Cuba. The court is expected to address a docket of 25 administrative and legal issues ranging from what defendants can wear in court to measures to prevent classified information from being divulged during the trial.

The judge ruled that Mohammed, Walid Muhammad Salih Mubarak bin Attash, Ramzi Binalshibh, Ali Abdul Aziz Ali and Mustafa Ahmed Adam al Hawsawi can elect not to attend their court proceedings. The caveat, Pohl said, is that they must understand their right to attend and the potential disadvantages of not doing so.

Based on the ruling, the defendants would have the right to submit a waiver request each morning that court convenes, and waivers would cover only that single day. Defendants who change their minds during the day could notify the guard force and attend court if it's possible to get them to the court facility after they make their request.

Mohammed, with a red, henna-dyed beard, wore eyeglasses, white robes, a black vest and white headpiece, sat with his defense counsel in the front row of the courtroom. His co-defendants, also dressed in white, sat quietly behind him, one in each row.

All five defendants were captured in Pakistan in 2002 and 2003 and have been confined at Guantanamo Bay since 2006.

Although none answered Pohl's questions during the arraignment in May, the defendants showed more signs of cooperation today. Each responded affirmatively when Pohl asked them individually to confirm that they understood his ruling. Mohammed responded, "Yes, but I don't think there's any justice in this court."

Some of the defendants asked questions to clarify the ruling, and Binalshibh raised concerns about guards who might intentionally misrepresent a defendant's intentions. Several of the accused seemed to be puzzled or even amused when Pohl asked if they understood that their trials would proceed even in the unlikely event that they were no longer in U.S. custody at the time, such as in the event of an escape.

During discussions that dominated today's session, Army Brig. Gen. Mark S. Martins, chief prosecutor in the Office of Military Commissions, argued that the defendants should be required to attend court proceedings, particularly in a capital case. Martins cited legal precedent, saying the accused have the explicit right to be present as their cases are presented, but not necessarily the right to be absent. "Apathy or disdain for the proceedings does not qualify as good cause [for absence]," he said.

James Harrington, Binalshibh's "learned counsel" who is experienced in handling death-penalty cases, disagreed. Harrington said defendants should be able to skip court as long as they acknowledge they have voluntarily waived their right to attend and understand that their cases could suffer as a result. Denying their request not to participate in the legal process could, in fact, violate their constitutional rights, he said.

James Connell, Abdul Aziz Ali's learned counsel, echoed that argument, noting that defendants who don't want to attend court can get removed by disrupting the proceedings. In this case, they are removed from the courtroom to individual holding cells, where the proceedings are piped in through closed-circuit TV. This, Connell said, amounts to a "waiver by conduct."

In other developments during today's hearing, Hawsawi requested additional legal representation through an interpreter. His counsel, Navy Cmdr. Walter Ruiz, a Navy reservist with experience in capital cases, requested Navy Cmdr. Suzanne Lachelier as a "resource counsel" to support his legal defense.

Lachelier previously represented bin al Shibh, which Pohl noted could cause a conflict of interest as the two defendants' cases move forward. Both of the accused agreed to waive any objections.

In another motion filed today, Cheryl Bormann, bin Attash's learned counsel, asked for a larger workspace and more resources for his eight-person defense team. A second work area the team had been using was plagued by rodents and mold, but has since been sanitized and declared useable by engineers and industrial health officials at the base, officials said. However, Bormann told Pohl the space is making her staff sick.

The motion hearings originally were slated to begin in August, but were postponed when Tropical Storm Isaac forced the commander to order nonessential personnel to evacuate the base. The proceedings already had been delayed a day after a coal-train derailment near Baltimore damaged fiber-optic lines that carry Internet traffic to and from Guantanamo Bay, including the defense and prosecution teams there.

Pohl said he plans to conduct additional hearings with one-week sessions beginning in December and continuing one per month through March. The tribunals are expected to begin sometime next year.

This week's proceedings are being broadcast via closed-circuit television to a media center here.

Five family members who lost loved ones in the 9/11 attacks were selected by lottery to attend the proceedings at Guantanamo Bay, as well as five support people to accompany them, officials said. Other families have been invited to watch via closed-circuit TV at Fort Meade, Fort Dix, N.J., Fort Devens, Mass., and Fort Hamilton, N.Y. However, only four family members accepted the invitation, and are watching at Fort Hamilton.

Spectators in the courtroom are sitting behind soundproof glass, and the proceedings are being rebroadcast with a 40-second delay to ensure classified information is not inadvertently revealed.