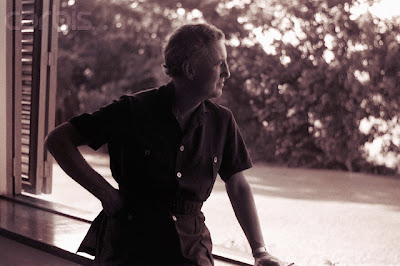 ﻿
The British newspaper the Guardian dipped into their archives to publish a letter Ian Fleming wrote to the newspaper in defence of his James Bond character and thrillers.

Fifty years of the James Bond film franchise - the first in the series, Dr No, was released in October 1962 - has meant 50 years of Bond habits ingrained in the public imagination, from how Bond dresses to what he drinks (although his new tipple of Heineken lager in Skyfall, the 23rd installment of the series which is released this year, has caused comment in some corners).

Yet critics of Bond's lifestyle - not least those who see it as an advertising agency's world - have existed for far longer than the life of the films. In 1958 - the year Dr No was published as a novel - Bernard Bergonzi, writing in The Twentieth Century magazine, attacked Ian Fleming's novels for what the Observer called "a diet of unrestricted sadism and satyriasis."

... In the letter to the Manchester Guardian, (below) published on 5 April 1958, Fleming admits that "to create an illusion of depth I had to fit Bond out with some theatrical props...with distinctive cigarettes...I proceeded to invent a cocktail for Bond (which I sampled some months later and found unpalatable)."

You can read the rest of the story and read Ian Fleming's letter via the below link: