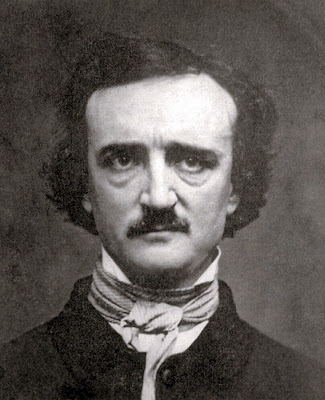 Arielle Emmett wrote an interesting piece for the Philadelphia Inquirer about the late great Edgar Allan Poe and his Philadelphia connection.

You wouldn't know from a reading of Edgar Allan Poe's Tales of Mystery and Imagination that his dead wife showed up on stilts to dance with him one night. You wouldn't suspect from the richness of his poetry and short stories that Poe and his family were starved for calories for much of their lives. And you wouldn't guess from the bitter obituary written by his literary executor and rival Rufus Griswold - who claimed that Poe "had few or no friends" and that few would grieve for him - that his reading public not only adored Poe, but would soon elevate him to the status of dark literary god.
Nothing about Poe seems obvious: not the literary squabbles that cost him the support and admiration of people who could have furthered his career; not the scandals surrounding his flirtations with drugs, booze, and married women; not even the details of his mysterious death in a Baltimore hospital.

Poe remains a giant of mysteries, and Philadelphia was where many of those mysteries were born.