A Soldier's Soldier Dies: Basil L. Plumley, A Veteran Of Three Wars And Featured In The Film 'We Were Soldiers,' Dies At Age 92 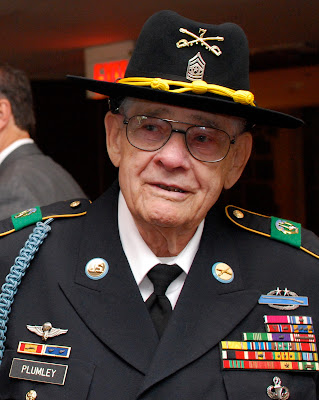 Seattlepi.com reports that Basil L. Plumley, a legendary soldier who was portrayed By actor Sam Elliot in a Vietnam war film, died. He was 92.


Basil L. Blumley, a renowned career soldier whose exploits as an Army infantryman were portrayed in a book and the movie "We Were Soldiers," has died at 92 — an age his friends are amazed that he lived to see.


Plumley fought in World War II, the Korean War and Vietnam and was awarded a medal for making five parachute jumps into combat. The retired command sergeant major died Wednesday.
... It was during Vietnam in November 1965 that Plumley served in the Battle of la Drang, the first major engagement between the U.S. Army and North Vietnamese forces. That battle was the basis for the book "We Were Soldiers Once ... And Young," written nearly three decades later by Galloway and retired Lt. Gen. Hal G. Moore, who had been Plumley's battalion commander in Vietnam.
In the 2002 film version, Mel Gibson played Moore and Elliott played Plumley. Galloway said several of Elliott's gruff one-liners in the movie were things Plumley actually said, such as the scene in which a soldier tells the sergeant major good morning and is told: "Who made you the (expletive) weather man?"

You can read the rest of the piece via the below link:
http://www.seattlepi.com/news/article/Vietnam-vet-Plumley-dies-featured-in-war-movie-3936630.php
Posted by Paul Davis at 4:39 AM