Behind The Black Mask: My Piece On The Threat Of Antifa 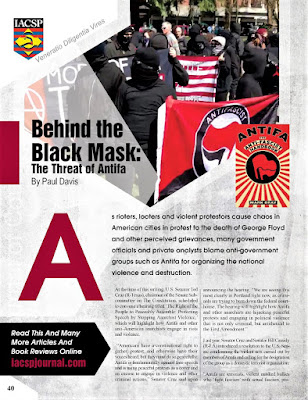 Counterterrorism magazine published my piece on the threat of Antifa.

As rioters, looters and violent protestors cause chaos in American cities in protest to the death of George Floyd and other perceived grievances, many government officials and private analysts blame anti-government groups such as Antifa for organizing the national violence and destruction.

At the time of this writing, U.S. Senator Ted Cruz (R-Texas), chairman of the Senate Subcommittee on The Constitution, scheduled  to convene a hearing titled ‘The Right of the People to Peaceably Assemble: Protecting Speech by Stopping Anarchist Violence,’ which will highlight how Antifa and other anti-American anarchists engage in riots and violence.

“Americans have a constitutional right to gather, protest, and otherwise have their voices heard, but they must do so peacefully. Antifa is fundamentally against free-speech and is using peaceful protests as a cover and an excuse to engage in violence and other criminal actions,” Senator Cruz said upon announcing the hearing. “We are seeing this most clearly in Portland right now, as criminals are trying to burn down the federal courthouse. The hearing will highlight how Antifa and other anarchists are hijacking peaceful protests and engaging in political violence that is not only criminal, but antithetical to the First Amendment.“

Last year, Senator Cruz and Senator Bill Cassidy (R-LA) introduced a resolution to the U.S. Senate condemning the violent acts carried out by members of Antifa and calling for the designation of the group as a domestic terrorist organization.

“Antifa are terrorists, violent masked bullies who ‘fight fascism’ with actual fascism, protected by Liberal privilege,” said the Senator. “Bullies get their way until someone says  “no”.  Elected officials must have courage, not cowardice, to prevent terror.”

“Antifa is a terrorist organization composed of hateful, intolerant radicals who pursue their extreme agenda through aggressive violence,” added Senator Cruz. “Time and time again their actions have demonstrated that their central purpose is to inflict harm on those who oppose their views. Like any terrorist organization they choose to pursue their political ends through violence, fear and intimidation. They must be stopped. I am proud to introduce this resolution with Senator Cassidy to properly identify what Antifa is: “domestic terrorists.”

But there are many others, such as New York Congressman Jerry Nadler, who claim the threat from Antifa is a myth.

In defense of Antifa, Mark Bray, author of “Antifa: The Anti-Fascist Handbook,” claims that the groups’ militant anti-fascism is a reasonable response to what he believes is the rise of right-wing politics.

“It is an unabashedly partisan call to arms that aims to equip a new generation of anti-fascists with the history and theory necessary to defeat the resurgent Far Right,” Mark Bray said.

This past June, ABC News reported that Attorney General Bill Barr directed the creation of a new law enforcement task force that will be focused on countering anti-government extremists.

“The ultimate goal of the task force will be not only to enable prosecutions of extremists who engage in violence, but to understand these groups well enough that we can stop such violence before it occurs and ultimately eliminate it as a threat to public safety and the rule of law,” Barr reportedly said in the memo.

“In a news conference at the Justice Department, Barr and FBI Director Chris Wray singled out the Antifa movement – which President Donald Trump has also blamed for the violence – in their opening remarks, though the DOJ has not provided direct evidence of widespread involvement of Antifa followers in the violence seen thus far across the country,” ABC News reported.

ABC News noted that in a podcast interview with Senator Cruz, Barr addressed the Justice Department’s investigations of acts of violence surrounding the protests of the George Floyd’s death. Barr stated that the Justice Department has about 500 ongoing investigations and singled out the Antifa movement by name, although no federal indictment has publicly tied the movement to a charged individual.

On July 2nd, Jason Charter, 25, of Washington, D.C., was arrested and charged with destruction of federal property. Although Charter was identified as a leader of Antifa in some media accounts, the Justice Department announcement did not mention this affiliation.

According to the Justice Department, on June 20, 2020, Charter, together with other individuals, destroyed the Albert Pike statue in Northwest, Washington, D.C., by pulling it from its base and setting it on fire. The complaint alleges that Charter was captured on video dousing the statue with a flammable liquid and then igniting it as it lay on the ground.  Charter is shown on video using the fire to light a cigarette. The complaint further alleges that Charter and others damaged and attempted to tear down the statue depicting Andrew Jackson at the Battle of New Orleans, located in Lafayette Square. Charter was captured on video climbing up onto the statue and affixing a rope to the statue that was then used to try to pull the statue down.  Three other men were previously charged with also destroying the Jackson statue.

“While the United States Attorney’s Office for the District of Columbia is committed to protecting the First Amendment right of individuals to protest peacefully, today’s additional arrest in connection with the violent destruction of federal property is a testament to our further commitment to prosecuting those criminal offenders who threaten not only property, but ultimately the safety of all through their violent acts,” said Acting U.S. Attorney Michael R. Sherwin.

James A. Dawson, the Special Agent in Charge of the Washington Field Office’s Criminal Division, added, “These individuals chose to engage in unlawful activity while among fellow citizens who were conducting lawful and Constitutionally protected protest activities. The FBI is dedicated to protecting peaceful protesters from those threatening their safety with violence and destruction of property, and where there is a federal nexus, we will investigate and hold the wrongdoers accountable.”

“Activists of the far-left Antifa movement began planning to foment a nationwide anti-government insurgency as early as November as the U.S. presidential campaign season kicked off in earnest, according to a law enforcement official with access to intelligence behind the shadowy group,” Bill Gertz wrote.

Bill Gertz reported that senior Trump administration officials and private analysts are warning that the radicals have rushed to exploit recent anti-police protests to set into motion a program of widespread civil unrest, a program that involves using the protests for looting and burning cities with the help of criminals and street gangs.

Bill Gertz noted that what makes Antifa unique is its willingness to use violence, what Antifa organizers and sympathizers call “direct” action in support of the anarchist and Marxist-Leninist agenda. “That often involves setting fires, looting, throwing bricks and bottles at police, and in one case the apparent use of a milkshake laced with quick-dry cement in attacking an opponent in the face.”

Bill Gertz explained that the name Antifa is derived from the Moscow-based Communist International that in 1933 directed the Soviet-led Communist Party USA to form the American League Against War and Fascism. That group was patterned after Germany’s Antifascist Action — or Antifa — formed in 1932. He noted that Communist Party leader Manning Johnson testified to Congress in 1953 that the goal of the front group was never the abolishment of fascism, but rather “the subversion and subsequent overthrow of the United States.”

In 2019, Gabriel Nadales, a former Antifa member, told Fox News that there many different groups within Antifa.

“You’ll find a lot of the members may do it for animal rights or for anti-capitalism, and pro socialism. Personally, when I was in Antifa, a lot of the activism I did was for animal rights,” Nadales said. “But once they came together in the Black Bloc and behind the black mask, they kind of forget all that.”

Paul Davis is a regular contributor to the Journal of Counterterrorism & Homeland Security Int’l. 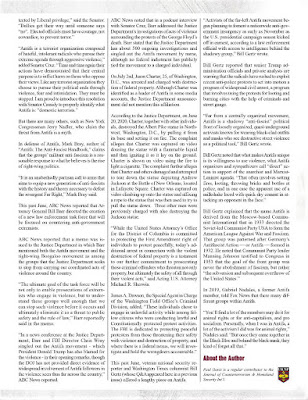