In A 'Coast-To-Coast Roast,' Colin Quinn Finds Humor In The State We're In 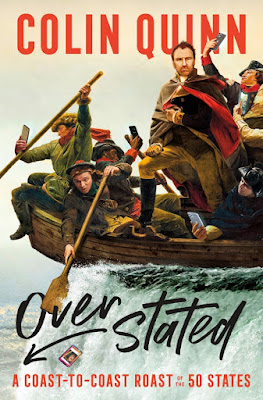 NPR offers a piece on comedian Colin Quinn, author of the new book Overstated: A Coast-To-Coast Roast of the 50 States.

No state escapes unscathed in Colin Quinn's new book: Vermont is "The Old Hippie"; Florida is "The Hot Mess"; in Wisconsin, "The Diet Starts Tomorrow." Even Quinn's beloved home state of New York is "The quiet state with the city that never shuts up."

As a veteran stand-up comedian, Quinn has spent more than a couple of decades on the road, performing in 47 out of the 50 states he now affectionately eviscerates in Overstated: A Coast-to-Coast Roast of the 50 States.

Mining history for material has become Quinn's specialty, from the Ancient Greeks in Long Story Short to America's founding fathers in Unconstitutional. For research, Quinn says he reads contemporary history sources as well as books written in the "really arcane language" of, say, the 1800s. He's careful not to get too mired in historical detail, though. (He says if he were to throw out names like Peter Minuit or Peter Stuyvesant to his late night comedy club audience they'd be like: "What did you just say? Stop saying Peter with some old name.")

At the same time, Quinn makes a point to connect history with what's happening today. In Overstated, he compares modern-day Social Justice Warriors (SJW) to the Puritans and observes that the current political divide has roots in the "determination" and "individualism" of white settlers who battled for territory as the United States was forming. " 'Don't tell me what to do' is basically the mission statement of the United States," he says.

You can read the rest of the piece and/or listen to the audio via the below link: