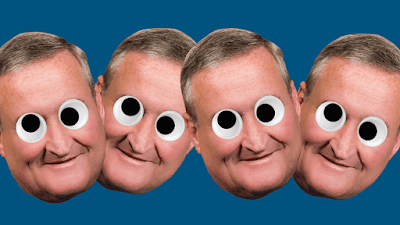 Philadelphia Weekly, a left-leaning alt newspaper, made a bold statement in announcing that that they are considering changing the newspaper to a conservative alt weekly.

But today, “alt” in Philly isn’t what it used to be. We want to reflect that change and continue to be a voice for the voiceless, but we need to know if you support such a move.

In 1971, we opened our doors as the Welcomat. Frank Rizzo was lording over City Hall and the LGBT crowd, punks and people of color kicked around by his police force needed a voice. It was us. Twenty years later, another Democrat promising to clean up Philly was in City Hall, and we became Philadelphia Weekly — a platform to push back against the city’s transformation into Ed Rendell’s gubernatorial campaign. For the people who called Philly home and didn’t have a voice – against City Hall, against whomever – we were there.

Then something happened in Philly: Alt became mainstream. We elected a district attorney who is anti-cop and doesn’t want to prosecute crimes. We elected a mayor who protects homeless encampments instead of local residents. We elected “leaders” who cater to special interests, while ignoring the needs of hard-working, taxpaying Philadelphians. The alternative voices we spoke to aren’t the alternative today – they’re in power.

People enraged by an inept and ineffectual city government. Those who oppose socialist and intrusive government programs and public policy. Those who see their neighborhoods ravaged by senseless violence and rampant drug use – while their elected leaders refuse to help under the guise of social justice.

Note: When I read the Philadelphia Weekly piece, I wrote "Bravo" on their Facebook page. Philadelphia needs an alternative to the liberal press in Philadelphia, which supports wholeheartedly the liberal mayor, the DA and other overwhelming left-of-center leaders in the city.

The Philadelphia Inquirer is losing readers due to their liberal slant. Once people in the center and on the right learn of Philadelphia Weekly's shift to a conservative voice, they will become regular readers and supporters.

Washington residents have a choice. Philadelphia area residents deserve a choice as well.

On a personal note, I recall that when I was 16 in 1968, I sent a bold query letter to the editor of the Drummer offering my services as a crime columnist. I told the editor that although the Drummer was a leftie newspaper and I was a conservative, I assured him that I was tuned into the city's counterculture and crime scene.

As a South Philly street kid and aspiring crime writer, I knew crime. I knew about drugs, street gangs and other things happening on the street.

The editor did not respond.

A few years later after I got out of the Navy, I sent a similar query letter to the editor of the Welcomat.

The editor did not respond.

All things come to those who wait, and many years later I wrote a piece for Philadelphia Weekly on South Philly. A year later I was finally writing a crime column for the South Philadelphia American.

You can read my 1994 Philadelphia Weekly piece below: 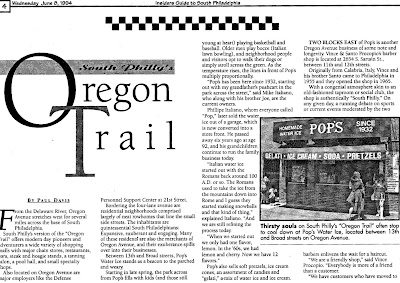 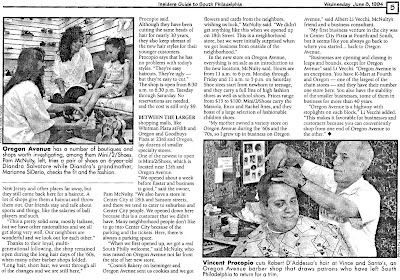