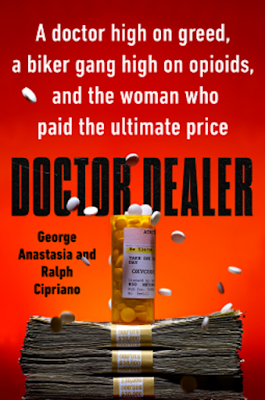 Ralph Cipriano at BigTrial.net offers a piece on the prison suicide of Dr. James Kauffman, the subject of his and George Anastasia’s new true crime book, Doctor Dealer.

On Jan. 26, 2018, the chaplain at the Hudson County Jail called the third wife of Dr. James Kauffman, to let her know that her husband had just committed suicide.

Kauffman, originally arrested on a gun charge, was being held without bail at the Hudson County Jail for the alleged murder of his second wife, April Kauffman, a crime that the government alleged was a contract hit.

The doctor, officials said, had been found face-down in his cell after carrying out what the Press of Atlantic City said was a "carefully planned" suicide by hanging himself with a twisted bed sheet.

But not everybody was buying it.

Andrew Glick, the outlaw Pagan biker and drug dealer turned lead prosecution witness, believed that Kauffman had faked his death and was alive somewhere else in the country under the witness protection program.

After Kauffman's body was cremated, Carole Weintraub, Kauffman's third wife, and former high school sweetheart, wound up with an urn, but she wondered whose ashes were in it. The six-page suicide note that Kauffman left behind only added to the mystery.

There was only one problem -- James Michael Kauffman was a doctor of osteopathy, and not an MD, a doctor of medicine, a mistake he would have never consciously made.

Was the signature on the note a clue that the doctor had written it under duress? After all, Freddy Auglello, the Pagan gang leader who was ultimately convicted of arranging the murder-for-hire of April Kauffman, had told Glick that he was using his South Philly mob connections to arrange the jailhouse murder of Dr. Kauffman.

Or was it an inside joke? Nobody knew.

But in the note, Dr. Kauffman claimed he was an innocent man.

"As G-D is my witness and will be I cannot live like this. I, no matter what anybody, says did not do anything to my wife . . . "

As far as the suicide note was concerned, Dr. Kauffman professed that he was a scapegoat framed by the real killers of April Kauffman. And that Dr. Kauffman had come to realization that he was never getting out of jail.

"This left me with no choice but to do what I am going to do now," he wrote. "i see those dirt bags range dup to see their butts while frying mine. To those who think that is a fabrication or a prevarication, I put my money where my mouth is."

The 2012 April Kauffman murder is the subject of a new book written by Big Trial correspondents George Anastasia and Ralph Cipriano. Doctor Dealer is now on sale on Amazon.com.