Sallie Gregory Hammett: I Wrote My Dog An Obituary Because Of Course I did. He Was The Best Boy. 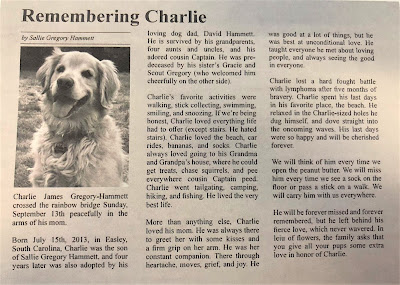 Janine Puhak at Fox News offers a piece on a woman who wrote an obituary for her late, beloved dog.

A South Carolina woman has eulogized her late, great golden Retriever in a moving obituary that is melting hearts on social media.

Sallie Gregory Hammet recently announced the passing of her beloved dog Charlie, who died at age 7 following a five-month battle with lymphoma. The Greenville woman, 30, said the precious pup had been her best pal since she adopted him seven years ago when she was single and living in a new city.

You can read the obit above and read the rest of the piece via the below link: