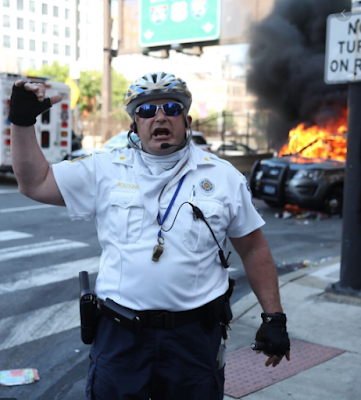 Ralph Cipriano at Bigtrial.net offers a piece on former Philadelphia Police Commissioner Ross’ view of the firing of Inspector Bologna.

Former Commissioner Richard Ross was watching video of the incident during an allegedly peaceful protest that got Staff Inspector Joe Bologna fired.

Ross froze the video in the middle of the action and said it was obvious that Bologna never struck protester Evan Gorski in the head with his baton, as falsely alleged by District Attorney Larry Krasner.

"How did this unravel with his [Bologna's] career ending in an instant?" Ross asked. "That should have never happened."

In an interview with Russell Kolins, a private investigator working for lawyers defending Bologna against criminal charges, Ross  ripped Police Commissioner Danielle Outlaw for being missing in action on June 1st, the day of the protest on the Benjamin Franklin Parkway that got Bologna fired.

"When you've got volatile circumstances," Ross said, "You have to know that things are going to go badly . . . To me, if your people are there and they're being put in harm's way, how do you not put yourself in that same predicament and lead from the front?"