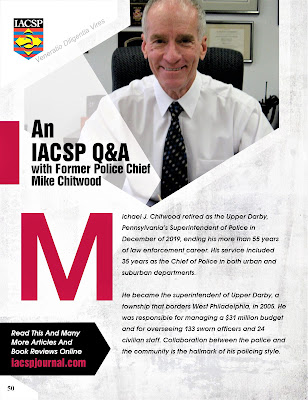 You can read the interview above and below:

Michael J. Chitwood retired as the Upper Darby, Pennsylvania’s Superintendent of Police in December of 2019, ending his more than 55 years of law enforcement career. His service included 35 years as the Chief of Police in both urban and suburban departments.

He became the superintendent of Upper Darby, a township that borders West Philadelphia, in 2005. He was responsible for managing a $31 million budget and for overseeing 133 sworn officers and 24 civilian staff. Collaboration between the police and the community is the hallmark of his policing style. Community initiatives in the Upper Darby Township include the Community Policing Center, a victim’s services program, the Citizen’s Police Academy and the 5th Grade Mentoring program.  In 2013, the Upper Darby Police Department was awarded the International Association of Chiefs of Police Victim Services Award in recognition of the department’s victim’s services program, Breaking the Cycle.

During his time in Philadelphia, he was awarded more than 70 commendations for valor, bravery, heroism and merit earning him the distinction of the most honored and decorated police officer in the history of Philadelphia law enforcement. In 1988, he was inducted into the Pennsylvania Police Hall of Fame in recognition of his outstanding service in the law enforcement profession.

Mike Chitwood was the subject of the 2013 book “Tough Cop”, authored by Hal Gullan, which chronicled his career in law enforcement and offered his perspective on issues facing law enforcement agencies.

Mike Chitwood, 75, has always been outspoken against criminals and supportive of police officers. His critics have called him “Dirty Harry” and “Media Mike,” and his supporters have called him a “Cops’ Cop.”

IACSP: I read the book “Tough Cop,” which I thought was interesting. Like you, I’m from South Philadelphia, so I’ve long been reading about you in the Philadelphia newspapers and I’ve seen you on television many times. To begin, what is your take on the violent protestors and looters who went wild in Philadelphia and other cities. Do you think the Philadelphia police and other departments across the country handled the riots well and properly?

Chitwood: I think across the board, police officers have a duty to protect legitimate protestors. But when people begin to commit crime, rioting, looting, arson, and aggravated assault, they should be locked up immediately. No ifs, ands or buts about it. To tell police to stand down and not do anything is absolutely inexcusable. It is insane and it obviously leads to what you see today. It is a disgrace.

IACSP: You worked the riots in Philadelphia in 1964 and 1968, so you have some experience in this. In your view, what should the Philadelphia Police Department and other police departments have done differently to quell the riots?

Chitwood: The intelligence was there that there was going to be something happening the night of the death of George Floyd. They should have been prepared. The Philadelphia Police Department and other police departments across the country were not prepared for the violence that was perpetrated by individuals, whom I believe were organized. Back in 64 it was the same thing, but the rioting was limited to Columbia Avenue in North Philadelphia. Frank Rizzo was the deputy police chief at the time and he basically told everybody, do what you gotta do. We had four men to a car, and we went out and made arrests and stopped the rioting. Period. That’s what should have happened now.

IACSP: Say what you want about the late Frank Rizzo, the former police commissioner and mayor, but Philadelphia was one of the cities that didn’t burn in 1968 because of his tough stance against rioters and his aggressive deployment of police officers into the fray.

Chitwood: You have to be prepared to take action. You can’t let the looters and rioters take over, and that is what happened in our society today – and it is still going on.

IACSP: I covered the 2000 Republican Convention for this magazine, and I interviewed then-Deputy Commissioner Robert Mitchell, who was in charge of security under Police Commissioner John Timoney. They had a good plan in place to handle the violent protestors. I was on the streets and watched the Philly cops deal with them effectively. Violence and vandalism were dealt with quickly.

Chitwood: The same plan that John Timoney had for the convention was probably updated and is still on the books when this stuff started, but they never implemented it. They weren’t ready, that’s the bottom line.

IACSP: Do you believe that political leadership is to blame rather than the police department?

Chitwood: That’s part of it. Police chiefs serve at the pleasure of the political structure. The mayor, the council, whatever it is. If they say A, it’s A. If they say B, it’s B. That is what happens in America today. It is a sad commentary.

IACSP: What is your view of the wide-spread anti-police campaign, which some people call the “War on Cops?” Does this remind you of the 1960s? I recall the anti-Vietnam War riots and the violent student protests. This was when cops were called “pigs.”

Chitwood: Obviously, there is more violence and the violence is more profound. What you are seeing is a total breakdown of America society. Until we take back the society, it’s not going to work. The problem is, the greater number of violent protestors and the majority of people keeping their mouths shut. They don’t say anything. That’s not good. Police officers look for support from the neighborhood, the political structure, the media and the police leaders. If they are not getting it, why should they do anything? They can step back and still get paid.

IACSP: And you see the more aggressive cops, like those in Philadelphia, being prosecuted, demoted or transferred. Some critics have cited that the “militarization” of police, particularly in Portland where we see cops in military camos, they are using in some cases heavy weapons. What do you think of the militarization of police?

Chitwood: In Upper Darby, we had gotten a van from the military. It was a huge military leftover van and it replaced another one we had, and we got it for nothing. We probably put two thousand dollars into it. We never had to use it, but if we did, just pulling up the street would scare everybody to death. Just the sheer showing of it. But in this day and age, the baddies on the street are more heavily armed than the police are. So, the police can go one step up and do the military thing, and in some places that’s what’s needed. You don’t take it out and ride down the street with it, but if there is a hostage or robbery situation, then you bring it out. It’s a show of force. The baddies and rioters in Portland, not the protestors, were using leaf blowers to blow the tear gas back against the police. They are sophisticated.

IACSP: The looters are criminal opportunists, but some of the violent protest leaders are smart people and well organized. You were the police superintendent of Upper Darby for 14 years. You had retired when this current stuff was going on. Did Upper Darby see violence similar to their neighbor Philadelphia?

Chitwood: They did. I stay in contact with the current chief and former political leaders, and there was a lot of rioting and stores were broken into, windows were broken, and places were looted. But I’m told – but I don’t know this to be true – but the police were told to stand down and not take any actions.

Let me give you an example of my philosophy. In New York about seven or eight months ago, police would go to a location and people would throw water bottles at them. Pre-Covid-19 and pre-rioting that you see today. I addressed the officers and said if anybody throws anything at you or assaults you in any way, shape or form, lock them up. If you are outnumbered, wait for reinforcements. Do not let this go. Do not turn your back and do not walk away. You are important to this organization, you are important to me, and you are important to your family. I don’t want to see anybody get hurt, but at the same time, I don’t want to see anybody take any crap.

IACSP: How do you feel about the movement to defund the police?

Chitwood: I think it is stupid. There is not a police chief in America who will say that he doesn’t needs more officers and more money to do those programs that benefit the community. And if you don’t get it, the people who are going to suffer are those in the lower-economic status. Without a good police department that’s fair and honest you cannot do anything else, because the police are the most important part. In the case of a robbery or a barricade, who are you going to call?

IACSP: With 55 years of experience, what would you say was the lessons learned?

Chitwood: Probably, the one lesson I learned, more than anything else, and it impacts policing in America today. I would call in every new hire and I tell them this: Always treat people the way you want yourself and your family to be treated. Through experience, I learned that this is what you have to do in policing. And more so today than ever. 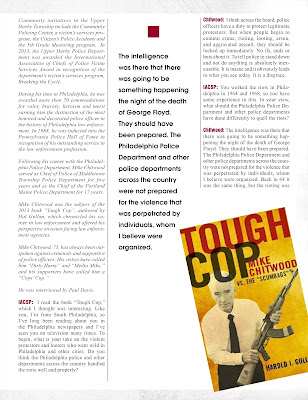 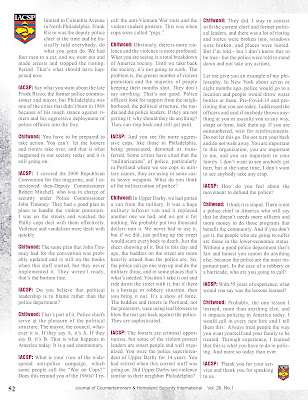