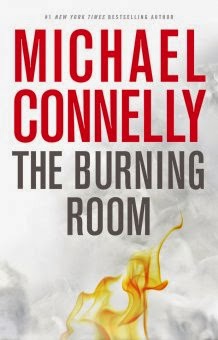 Twenty-two years ago, Michael Connelly introduced the world to Harry Bosch, a determined cop with a haunted past and a heart of gold. Bosch was an old soul at the start of "Black Echo," a homicide detective in his early 40s with an infamous, colorful career and two tours in Vietnam to boot. In "The Burning Room," Bosch is in his mid-60s, reluctantly nearing the end of his career after 18 novels' worth of action and mystery. He's the oldest detective in the Open-Unsolved Unit, entering his final year on his Deferred Retirement Option Plan. "To him, every day he had left on the job was golden."

As part of a new departmental initiative, Bosch is paired with the youngest officer in his unit, a 28-year-old "slick sleeve" and rising star named Lucia Soto. The two form an amiable, productive partnership — not only is Soto smart, she's as hardworking and dogged as Bosch, driven in part by a formative tragedy in her childhood.

The novel centers on two cold cases with real reverberations in the present day. The first involves the recent death of paraplegic ex-mariachi Orlando Merced, caused by blood poisoning from the bullet lodged in his spinal column when he was shot in Mariachi Plaza 10 years earlier. The shooter was never found and the prevailing theory was that Merced was the victim of a stray bullet in a gang-related confrontation. Merced became a political symbol, trotted out regularly in a replica of his bloody shirt to add fuel to a mayoral campaign focused on the neglected communities of East Los Angeles.
As a result, Bosch and Soto's new case is high profile, high priority and politically sensitive. Merced's death opens fresh avenues of inquiry, his corpse offering up the only good clue to be had in years — the bullet comes from a rifle, throwing doubt on the theory of random violence.

While the Merced case cooks on one burner, Bosch discovers Soto investing precious time in another cold case, an apartment fire on Bonnie Brae that killed nine people, a woman and eight children in an unlicensed day care — an unsolved arson and multiple homicide. When Bosch learns that Soto was one of the children who survived, he finds a way for them to work both cases together. This plot bifurcation spreads out the book's momentum but not to ill effect. The device works thematically, both cases centering on crimes that claimed poor Latino victims, crimes that were never cleared.
You can read the rest of the review via the below link:
http://www.latimes.com/books/jacketcopy/la-ca-jc-michael-connelly-20141102-story.html
You can also read my Q & A with Michael Connelly about his novels, the Internet, crime novels, crime, Clint Eastwood, and the current state of journalism via the below link:
http://www.pauldavisoncrime.com/2010/04/killers-cops-and-crime-reporters-q-with.html
Posted by Paul Davis at 7:24 AM