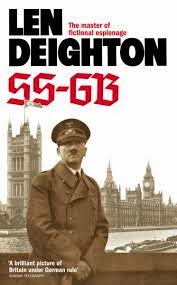 Imagine that America never entered World War II and Great Britain lost the war. And now the once proud British are occupied by the victorious German Army and the dreaded Nazi SS.

Len Deighton did this in his clever alternative historical thriller GS-GB.

I liked the book when I read it many years ago and I reread the thriller a few years ago.

Now The Hollywood Reporter reports the BBC is producing a mini-series based on SS-GB.


The BBC has ordered a drama that imagines a Britain occupied by the Nazis, penned by the writers of the most recent James Bond films based on an alternate history novel.

U.K. public broadcaster has commissioned ‎SS-GB from Bond writers Robert Wade and Neal Purvis and based on the novel of the same name by Len Deighton. The BBC order is for five hourlong episodes produced by Sid Gentle Films for flagship network BBC One.

... SS-GB is a thriller set in 1940s London under the premise that the Germans won the Battle of Britain and London is under Nazi occupation.

"Archer is a Scotland Yard detective working under the SS facing the dilemma of whether to effectively collaborate or join the resistance," according to a show description. It also says that the drama is "an explosive thriller that will ask: what would you do, faced with stakes as high as this?"