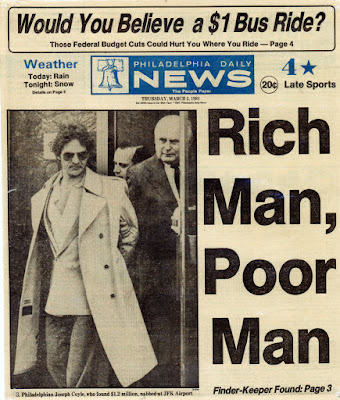 Tommy Rowan, who is offering a series at Philly.com called Crooks, which tells the forgotten stories behind some of the most outlandish crimes, and criminals, in Philadelphia history.

The latest story is about Joey Coyle, a South Philly guy who found, and lost, a cool million that "fell off a truck."

He was sipping coffee on his Front Street steps on the morning of Feb. 26, 1981, waiting on the mailman carrying his $700 paycheck. But he decided his next binge couldn’t wait.

He persuaded two young neighbors, John Behlau and Jed Pennock, to drive him to his drug dealer’s house. But the guy didn’t answer the door. On the ride back, Coyle was slumped in the front seat of Behlau’s maroon 1971 Chevrolet Malibu, scanning the South Philly sidewalks for potential metal scraps, when he spotted it.

Sitting wheels-up on Swanson Street near Wolf was a yellow metal storage container. It would become his salvation, and then his downfall, a bizarre saga splashed across newspaper pages and the silver screen.

As the driver slowed to maneuver around it, Coyle opened his door and righted the container. The lid flaps split, and two canvas bags labeled “Federal Reserve Bank” spilled out.